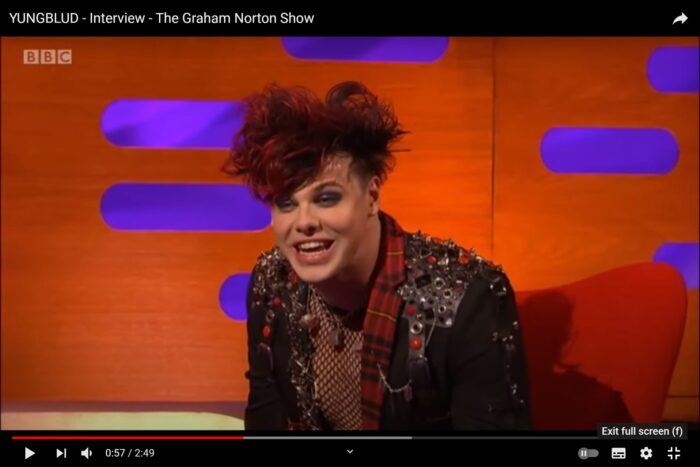 Dom Harrison, aka Yungblud appeared on BBC TV’s the Graham Norton Show (Friday 8 January 2021) performing ‘Cotton Candy’. Playing to presumably an empty studio, except for the crew and other guests on the show.

It was the post-performance interview which was remarkable, to anyone (like myself) who had never seen or heard the 23 year old in conversation before.

He was simply amazing: funny, self-deprecating, down-to-earth, camp, full of enthusiasm… Just a total charmer. Great big smiles, strong Northern accent, thoroughly unpretentious. He engaged with all of the other guests and the host.  Talked about chocolate hob-nobs, missing England, American fakery…  watch it below, and tell me that he isn’t the UK’s most charming and likeable Pop-Star.  It reminded me of the first time Boy George appeared on Wogan – or priceless clips of Pete Burns on primetime TV….

His current ‘look’ is amazingly Goth-Punk retro too – studs, leather, tartan, fishnet vest – it looks like Daniel Ash from Bauhaus or the legendary Batcave house band The Specimen are a major inspiration (to his stylist).

The song and Yungbluds musical output… I will leave to a younger writer to tell you about. I am not the target audience and far too cynical.

I am impressed with and amused by the video for God Save Me… because it features a kickass, drumming Bear ( and I have a mate called Bear who was a drummer and kicks ass.)

I really don’t know if Friday Night Terrestrial Television means anything any more …. it’s not the 80’s when a fourth TV Channel was ‘revolutionary’…  but I was surprised at how much joy a young English Pop Star can bring to the screen in less than three minutes.

This Boy deserves to be the superstar he looks destined to become.  Yungblud gets the Louder Than War seal of approval – based on the sheer weight of his personality and charisma he showed on Graham Norton.

The post Yungblud proves that he’s the best young pop star in the UK appeared first on Louder Than War.