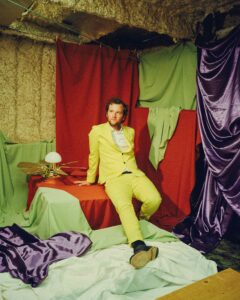 Vampire Weekend’s Baio releases his third solo album in January and trails it with new singles Endless Me, Endlessly and What Do You Say When I’m Not There?

Baio recorded Dead Hand Control over 18 months at Damon Albarn’s 13 Studios in London, as well as C+C Music Factory which he founded with bandmate Chris Tomson in Los Angeles.

The album takes its name from a rumoured Soviet missile system designed to obliterate America, and a legal strategy for attempting to control the beneficiaries of your will after you die.

“I was looking at the past five years of American life and obsessing about topics like death, wills and nuclear war”, Biao says of the album’s origins. “But at its heart, it’s about how the only thing you can control is the way you treat the people in your life.”

Baio zigzags between techno, art rock and a dash of funk, exploring what it means to care for one another in a society in upheaval. The buoyant Talking Heads-inspired Endless Me, Endlessly is an undeniable proclamation of selflessness.

“Endless Me, Endlessly is a simple song about being there in every possible capacity for someone else,” reflects Baio. “Through hard times just as much as good times. In a way, it’s a bit of a fantasy – a single person cannot be everything to someone else. Lately, though, I have found fantasy to be a thing of comfort.”

That theme is echoed in the video for the track where he is recorded performing celebratory acts backwards. Conversely, What Do You Say When I’m Not There? is the polar opposite emotionally as an ode to insecurity, and the fact that you can never truly know what is going on in someone else’s mind.

Dead Hand Control marks a big year for Baio which saw a Grammy win for Best Alternative Album for Vampire Weekend, an EP release from C.Y.M., Baio’s project with Mike Greene and the launch of Ringer podcast The Road Taken hosted by Baio & Tomson.

Dead Hand Control can be pre-ordered at: https://lnk.to/DeadHandControlPR

The post Watch this! Vampire Weekend’s Baio back with new album and two singles   appeared first on Louder Than War.