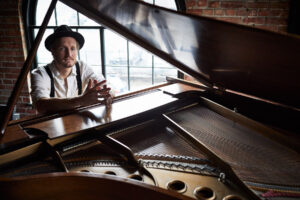 His collection of songs, which have been in the works for the better part of a decade, offer intimate piano-centric instrumental songs capturing Fraites’ reflective moments from his Denver home.

One of the first two singles, Tokyo, is described as a brisk string-swathed portrait of the titular city.

“Tokyo is one of the oldest songs on the record,” notes Jeremiah. “I believe I wrote it about seven years ago. I went back and forth on whether to record this song on a grand piano or my custom felted piano nicknamed ‘Firewood’ – I ultimately landed on using the softer, more distinct Firewood because I felt that captured the soul of the tune better.

“This was a song I was guilty of over-thinking and confessing to my wife that I ‘just don’t think it was ready’ for the album. I suppose finding that fine balance between overthinking and not thinking at all is the key when in the studio. Currently this is my absolute favourite song on the album.”

The other single, Maggie, is dedicated to his wife’s beloved dog who passed away during the recording process.

“I am most proud of Maggie because of how difficult it was to record and to get ‘right’ – I probably said out loud on five separate occasions that I was not going to use it and delete it from the record as it continually seemed to fight me.

“It was also titled something completely different, but while finishing the mix at my home in Denver, my wife’s beloved dog Maggie passed away far in Italy and the name just fell into my lap. Adding the drums at the 11th hour of recording (per my wife’s insistence) was the lynchpin for finishing this song. Not only could I no longer imagine the song without drums, but no longer imagine the album without this song.”

Fraites plays nearly every instrument on the album, including guitar, drums, synths, and programming. It was co-produced and engineered by David Baron, who has worked with Jade Bird, Vance Joy, Shawn Mendes, and features other collaborators such as The Lumineers’ violinist Lauren Jacobson, cellists Rubin Kodheli and Alex Waterman, and Macedonia’s 40-piece FAME’S Orchestra.