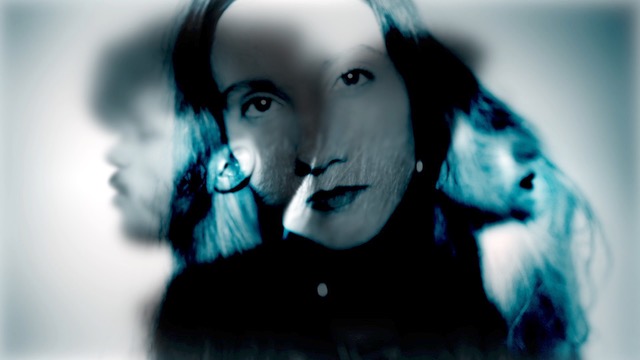 Inspired by nights gigging and partying in underground London clubs, Beside Myself is a snapshot of halcyon times, laced with all the promise of their return in 2021.

Comprising songwriter Amanda May and guitarist Chops, the UK-Canadian duo formed through a series of chance encounters, theirs is a companionship as formidable as it is unlikely and alive with the irrepressible energy of the unpredictable. The wryly titled Beside Myself is the B-Side to their new 7” single.

With connections in Toronto, London and Brighton, Sister Psychosis may not have one singular base, but their first release, Into Your Memory/Beside Myself owes its origins to one place in particular: Manchester, England. In an unlikely tale of subterfuge, opportunism and pure luck, May posed as a caterer to blag her way into the backstage area at one of Noel Gallagher’s shows. Soon finding herself face-to-face with the man himself, Gallagher invited her to hang-out and even watch the gig from side-of-stage. Inspired by the warmth of this once-in-a-lifetime encounter and the renowned rich musical heritage of Gallagher’s hometown, eighteen-year-old Amanda May decided to make the pilgrimage to his hometown of Manchester with a head full of songs and an innate feeling of self-belief.

Reminiscing on the unforgettable experiences that shaped Into Your Memory, Amanda May says, “The lyrics were inspired by my encounter with Noel Gallagher meeting him in Toronto. I got to meet him, hang in his dressing room and watch the gig from side stage so I was pretty happy. He was such a cool dude. So friendly and humble. When he introduced himself to me I found it so bizarre. Like of course I know who you are mate! A few months later, I had just finished my contract as a PR girl at an artist management company in Toronto and had nothing to do, so I flew to the U.K. on my own and just sorta drifted around. No accommodation booked. Didn’t know anyone. Just on the hunt for adventure and I got it… I just did a bit of a ‘Madchester’ / Brit pop tour that I found online and that flat was one of the stops people recommended. It was there I wrote Into Your Memory’.. Meeting Noel, I realised that my dream of signing to Creation wasn’t that far fetched, if I could pull off what I did that night.”

Check out the video for Beside Myself below.

Could this be the Christmas Number One? Great new boyband from Teesside – Benefits