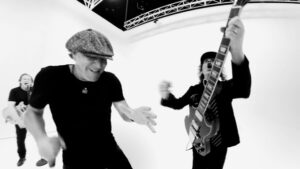 Brian Johnston’s hearing problems and the sad passing of Malcolm Young seemed to be the end of AC/DC but it was a big mistake to write off the Aussie rock legends who release Realize as their new single.

They came back with a bang in 2020 when their comeback album, Power Up, topped the charts in 18 countries, including the UK, and now they’ve released Realize.

The video for Realize is co-directed by Clemens Habicht, who has worked with Tame Impala and Liars, teaming up with the band’s creative director Josh Cheuse.

The black and white-hued video showcases Angus, Brian, Cliff, Phil and Stevie rocking out ‘together’, but all is not what it seems.

Confronted with the challenge of having the band in five different locations the co-directors approached the video as a puzzle, calling on Habicht’s technical expertise, and pieced each individual performance together to create a cohesive visual that shows AC/DC like never before.

Not surprisingly they were inducted into the Rock and Roll Hall of Fame in 2003 and won their first Grammy Award in the Best Hard Rock Performance category for War Machine in  2010.

For their seventeenth full-length album the band reunited with producer Brendan O’Brien who helmed Black Ice in 2008 and Rock Or Bust in 2014. The new line-up cut twelve new tracks for the album that proudly maintained their signature sound.

Power Up is available now https://acdc.lnk.to/pwrupPS.

Watch this! Asian Dub Foundation are back with a new video featuring comedian Stewart Lee.