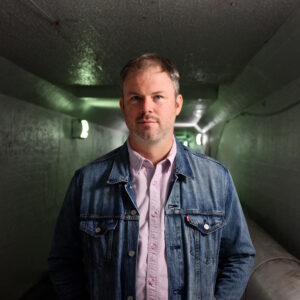 Paul Murphy, a.k.a. POSTDATA, has announced the release of his new album, Twin Flames, and shares the video for Nobody Knows exclusively with Louder Than War.

The project features a rotating collective of supporting musicians working with Murphy on acoustic-oriented songs, including Murphy’s brother Michael Murphy, Grant Hutchison and Andy Monaghan of Frightened Rabbit, Tim D’Eon of Wintersleep, and Simone Pace of Blonde Redhead. The album will be released on the 5th of March on Paper Bag Records.

On the video, he says: “During the first lockdown when I was gearing up for planning the video, my brother Michael and I were talking about performance videos and the general weirdness of them but then about how it’d be kind of interesting to try one with all the COVID protocols in place knowing that there would be no shows in the near future and, if so, that the show experience that we’re all accustomed to would not be the same for quite some time. So I think it started as a dystopic idea for how shows in the future would be or something to that effect. Chris loved the idea and thought he could expand on it with different visual techniques. We made some dialogue for it. Planned out scenes. The only issue is that we couldn’t travel to actually be in the same room to do it. So then we just let Chris and his imagination take over.”

Watch the video below.

The album is available now on pre-order from Paper Bag Records.