Watch This! Pale Waves back with hot single Easy

Bands, Featured, News, Pale Waves and Who Am I? 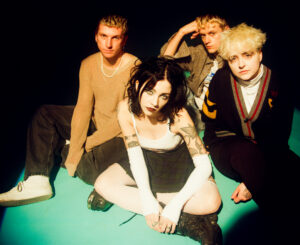 A resurgent Pale Waves kick off 2021 with new single Easy, which made its debut on BBC Radio One as Annie Mac’s Hottest Record in the World.

It’s the third track to be taken from the band’s  second album, Who Am I?, set for release on 12 February via Dirty Hit.

The video, directed by James Slater, is a gothic romantic brought to life, a Tim Burton-inspired wedding built around one of the main lines of the chorus: ‘You keep the lights on for me’.

“I wore a wedding dress throughout and we shot the video in an old abandoned church”  says frontwoman Heather Baron-Gracie. I’m really inspired by the gothic medieval aesthetic and, at the time I was thinking of the video, I was watching a lot of Tim Burton films, whose creativity really inspires me.”

On Who Am I? Heather Baron-Gracie’s songwriting holds the last few years of her life up to the light, reflecting on her own growing pains – depression, distraction and feelings of darkness. But also, her experience of falling in love and emerging with a clarity and optimism – being more open about her sexuality and stepping forward as the sort of frontwoman she couldn’t see when she was growing up.

The album acts as the Pale Waves manifesto, inspiring inclusivity, self-discovery and the notion of being whoever the hell you want to be.

The tightknit band are Baron-Gracie, drummer Ciara Doran, guitarist Hugo Silvani and bassist Charlie Wood.  Pale Waves released their debut album, My Mind Makes Noises, in September 2018, by which time they had already won the NME Under the Radar award, made the BBC Sound of 2018 shortlist and toured with fellow Dirty Hit label mates and mentors the 1975.

When the album chart at Number 8 in the UK, Pale Waves were seen as more than a breakthrough act and instead an important emerging indie-pop band.

You can pre-order the album via http://dirtyh.it/whoami

The post Watch This! Pale Waves back with hot single Easy appeared first on Louder Than War.

Published in Bands, Featured, News, Pale Waves and Who Am I?