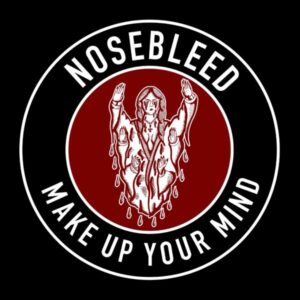 Leeds’ besuited trio Nosebleed return with a slab of dark and grinding punk rock, a taster for their forthcoming second album, Dance With The Devil. Their new single, Make Up Your Mind, is released today and we have the video premiere right here!

In 2018, when Nosebleed released their debut album, Scratching Circles On The Dancefloor, we reveled in the riot of spitting guitars and manic rhythms that swirled up in a feverish mayhem. It was a fully-formed debut album that raced out of the blocks. And now, Nosebleed are back.

On their new single, however, they’ve decided to drop off the intense pace that stamped out their earlier work and drive home a sultry and darker tone of beefed-up and grinding blues punk ‘n’ roll. The video was shot on the North York Moors in the middle of November 2020 and shows the band dragging the bodies of unknown victims through woods and fields to the point of their final resting place. Check it out below!

On the song, singer Eliott Verity says “it’s a song about having an awful time being released at the end of an awful year”. Of course, and as we slide into 2021, the show continues. No doubt, this year will see a plethora of releases harnessing the horrorshow that was 2020.

The band continue: “The track is a departure from our usual frenetic riffing, reflecting a somewhat bleak and dystopian year in human history. In this track the we lean heavily on our rock n roll and blues influences with a dynamic blues sound”. It’s certainly a sidestep away from what we’ve heard of the band previously, but one that suits them perfectly and is perhaps a preview of what we can expect from their second TNS Records-released album, Dance With The Devil.

As we await the full release of Nosebleed’s second album, they have a ton of merch available here.

The band have also contributed a new song to the latest TNS compilation, Cheap Cans Broken Vans and Basement Bar Bands. The compliation is released in February, but is available now to download from Bandcamp, and as a double LP on pre-order from the TNS website. About the release, TNS state: “We certainly aren’t claiming this represents the whole of the huge and wonderful DIY scene. This is just where we are now. It is a collection of bands that we absolutely love who have either recently been released on our silly little label or who have blown us away at a small venue in recent years. I’m sure any DIY band can relate to the ‘cheap cans’ or ‘broken vans’ bit of the title. The ‘basement bar bands’ bit relates to where we were when we started the label and ran regular gigs in the Basement bars of Retro Bar and Joshua Brooks in Manchester. These were amazing and formative years, where the ideas that eventually led to us reaching 100 releases were originally formed. The art has a different circle to represent each of the 100 releases. Every single release has been important to us.”.

As we begin 2021, with the Brexit repercussions crashing down on touring musicians, we should remember just how much bands like Nosebleed rely on building fanbases across mainland Europe, how much of that groundwork they have already laid, and the danger that they are currently in of having that base ripped out from under them without a second thought. 2021 will be a year to support our local scenes as much as we possibly can. Bands like Nosebleed and labels like TNS are integral to their survival.

The post Watch this! Nosebleed premiere video for new single out today appeared first on Louder Than War.

Pain of Salvation to release concept album “BE” and acoustic live album “12:5” on vinyl