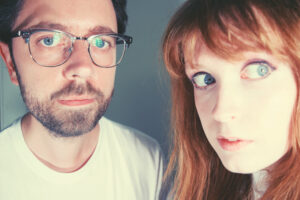 Lily Higham and Gordon Johnstone will release the PCPQ EP in April 2021. The pair were the prolific songwriting force behind  L-space who released three albums between 2018 and 2020.

Using their L-space experience, Lily and Gordon have developed a different sound for PCPQ blending organic textures, retro-futuristic synths, and mechanical beats. They’ve added a pop sensibility that is designed to fuse together with Lily’s distinctive vocals.

The duo had a busy 2020 releasing singles, including You Wouldn’t Download A Car, as well as two collaborations with Japanese band Macaroom before setting out to record their debut EP.  They say the EP is a collection of immersive alt-pop tracks blending classic synth-pop arrangements with ethereal vocals and imagery-laden lyrics.

Salt finds Lily ruminating on a feeling of creeping environmental anxiety, and how we live a looming, or contemporary crisis that feels unassailable and ever-encroaching.

Post Coal Prom Queen are currently working on their debut album and preparing for live shows when restrictions are lifted.