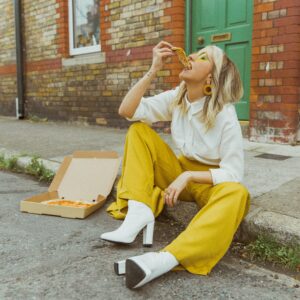 Lockdown is tough for everyone including Ireland’s Laoise, who was considering packing music in, but instead she decided to channel that frustration into writing her new single Healthy.

She joined her long-time collaborator Seán Behan on a remote island off the west coast of Ireland to write new material with ocean waves crashing just outside their window. Healthy is the first indication of  Laoise’s new musical direction offering a softer, more controlled side to her voice evokes a sense of calm, but still maintaining her trademark playfulness.

“Writing this song felt so natural as Seán had a simple instrumental idea that brought me out of a pandemic-induced songwriting rut”, says Laoise. “During that time, I was discovering a new way of viewing the world – I spent some time offline and started listening to myself. Things like asking myself what I wanted, why I wanted the things I did and if they were really beneficial to me as a person, or if they were attempts to obtain some sort of external validation – that’s very confusing to navigate as an artist.

“It was also extremely uncomfortable calling myself out like that, but I think it worked as a great act of healing, because in the long run when you rely on others to give you validation, it stunts personal and artistic growth. Now, I’ve learned to trust my instincts and give myself what I want and need where I can.”

Originally from Galway in Ireland, Laoise grew up surrounded by traditional Irish music, which is a world away from this new sound. She learnt to play the fiddle at the age of 5 and would regularly attend traditional Irish sessions at her local Galway pub. It was that sense of togetherness through music that made her want to pursue being a musician as a career.

The post Watch this! New single from Ireland’s Laoise appeared first on Louder Than War.