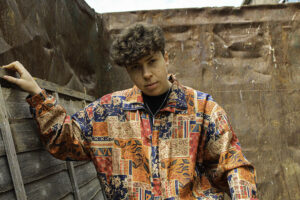 Marie White made a big splash when she won Glastonbury’s Emerging Talent Competition and as she prepares to release her debut EP has released Sleepwalking as a single.

After winning the competition Marie went on to perform every single day across Glastonbury’s Rabbit Hole, Green Peace, Acoustic, Hospitality and BBC introducing stages to thousands of festival goers.

After a nightmare first gig playing to two people she built a following supporting Keane at their reunion gig in 2018, and the band personally asked her to join them on the UK leg of their Cause and Effect tour in September 2019. With a mop of curly hair, a loveable smile and enough retro sportswear to fill a vintage store, her colourful jackets and patterned shirts represent her unapologetic individuality.

Marie grew up listening to her mum’s R&B favourites including Stevie Wonder, Luther Vandross and Aretha Franklin, as well as her dad’s classic rock collection including David Bowie and Bruce Springsteen. As a result Marie has been described as the lovechild of Tracy Chapman and Lewis Capaldi with a gift for story-telling.

She turned to music after a life-changing sports injury ended her hopes of a top class badminton career, so bed bound and heartbroken she channelled her problems through poetry and started writing songs. “You know those relationships where you both just sort of co-exist in each other’s company?” says Marie. “When you’re together you’d rather be alone, but when you’re alone you start to feel lonely? You feel comfortable and safe, but still know it isn’t right? I wondered if a single phrase could encapsulate such a complex feeling and I thought ‘sleepwalking’ summed it up perfectly.”