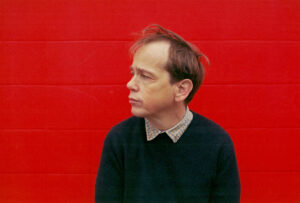 Robot Joy Army is the first single released off the upcoming second album from Ed Dowie which is the second album on the Needle Mythology label founded by music journalist Pete Paphides.

In 2017, Dowie released his bebut album, The Uncle Sol, which BBC Radio 3’s Late Junction made one of their albums of the year. Four years on, Dowie returns with an album, The Obvious I, marking a pronounced evolution from his earlier music. His label boss says Dowie is adhering to Kraftwerk’s maxim about achieving the maximum emotional impact by the most minimal means.

Robot Joy Army is a synergy of clockwork beats and somnambulant harmonies, which bring the album to a conclusion. It’s a song as apposite to cold war Russia as it is to basement dwellers in overpopulated South Korean conurbations, and shift workers at Amazon Fulfilment Centres. The Obvious I is a record that sees Dowie drawing on musical lessons learned throughout his life, from his childhood as a chorister in Dorset taught to play piano by his father who himself composes choral classical 20th Century Music.

It also explores pivotal friendships made following the dissolution of his first group Brothers In Sound, when Dowie enrolled to study Music, Technology And Innovation at De Montford University in Leicester. The first module studied by Dowie during his time in Leicester introduced him to the work of minimalist composers such as Morton Feldman, Pauline Oliveros and La Monte Young.

“It helped break down the barriers between what pop is and what all this other stuff is,” says Dowie. “I love the way sometimes little pockets of beautiful melodies sneak into the world of experimental music – Gavin Bryars’ Jesus’ Blood Never Failed Me Yet, the songs of Cornelius Cardew, the beauty and emotion in something like Terry Riley’s In C, and obviously the way the work of minimalists Philip Glass and Steve Reich seem to stray into quite sentimental areas.”

The Obvious I is co produced by pioneering British experimental musician and sometime member of Polar Bear “Leafcutter John” Burton.

The post Watch this! New single from Ed Dowie on the new Pete Paphides label appeared first on Louder Than War.

Pete’s gold Strat has been won!