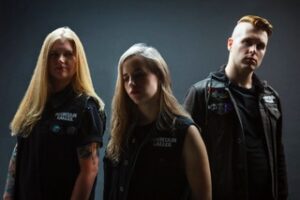 Heavy, progressive, instrumental three-piece Mountain Caller have released a new video for I Remember Everything in support of their debut album Chronicle I: The Truthseeker.

“In The Truthseeker, we join The Protagonist at the edge of the Twilight Desert, compelled by an indefinable but urgent need to set forth on an Odyssean journey to rediscover her memory and her voice,” says guitarist Claire Simson.

Over the course of 42 minutes, we travel from barren wastelands to mysterious cities, encountering trials of both body and spirit. The video for I Remember Everything was directed and produced by friend of the band Tom Le Bon.

“It tells fragments of the story written in tandem with the album and even features The Protagonist. It’s not a literal dramatisation, but the scenes are symbolic parts of the story and the film team did an outstanding job bringing it to life. We are beyond stoked with how it turned out and can’t wait to share it with the world.”

The album was recorded in January this year at No Studio in Manchester by producer Joe Clayton of Pijn, and mastered by Magnus Lindberg of ‘Cult Of Luna’. For the band, it’s the fruit of three years of jamming, crafting, and conceptualising a collaborative piece, where each instrument takes centre stage from time to time as Simon, bassist El Reeve and drummer Max Maxwell, take the listener on a challenging journey.

Chronicle I: The Truthseeker is the beginning of a saga, and the band say it is a feminist allegory created in tandem with the music.

The post Watch this: Metal/prog trip Mountain Caller release new video for I Remember Everything appeared first on Louder Than War.

In conversation with Stephen Lawrie (The Telescopes)