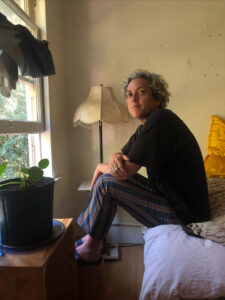 The album from which the new song is taken combines samples and collages that Caye recorded over the previous five years, woven together to create something that feels both familiar and yet alien, earthly yet ethereal. It stumbles through unique forms of psychedelic folk, at times peering through dense hazes, while in other moments skipping lightly. Songs like Slippery Snakes feel in part like leafing through a hidden sketchbook, catching glimpses of works in progress that slowly reveal a whole picture.

On the song, Caye gets right to the point stating: “Slippery guitars fathoming the twisty snakes of the unconscious. For the boy without a dick, and all dicks’ a-phantom”.

John Dwyer says: “A truly interesting conglomeration of loose inspirations and conjurings. A hard to decipher sound all together which makes it worth every moment. A sprinkling of Catherine Ribeiro, Dr. John, Terje Rypdal & Nico. Far out sun-soaked odysseys & moon dappled woodland night creepers.”

Check out the video for Slippery Snakes below.

Published in Featured, Music and News