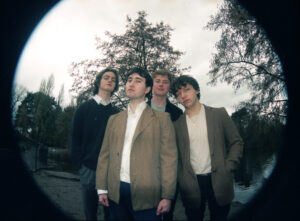 Ever since the Fab Four left Liverpool the city has always been a safe haven for bands with a keen ear for a melody and offering some classic Scouse attitude like Courting.

They are the latest band off Merseyside’s melodic conveyor belt, and who musically probably sit somewhere between Liverpool’s post punk golden age, Hooton Tennis Club and the lost pop genius of The La’s.

They have released Grand National as the lead track off their debut EP. Steve Lamacq gave Grand National its first play on BBC 6 Music, and not surprisingly the still undisputed King of Indie Radio loved it.

Grand National is an anti-anthem for a generation uneasy with cruelty of horse racing and the gambling industry surrounding it up. It’s a bold move as the Grand National at Aintree is world famous generating millions for the local economy, but remains a gruelling race where horses and jockeys still regularly fall as they try to jump the daunting fences. The band make their position clear as frontman Sean Murphy-O’Neill sings: “I don’t care if he dies, it’s entertainment.”

The cheeky four piece even booked a high street chain betting shop as the location for the video, but the plug was pulled when the bookies realised what the song was really all about. Instead the band decamped to a drab pub lurching between imagery of televised horse racing, betting, drinking and arguing. “Grand National is our best and last look at Middle England,” says Sean Murphy-O’Neill. “Parents evenings, horse racing, and watching the chemtrails from lawns lined with astroturf.”

Their late 2020 release, Popshop!, and two previously unheard songs Crass and ‘Slow Burner, make up the EP’s tracklisting. The band’s first singles, Not Yr Man and Football were self-released. They’re now been picked up by Nice Swan Records for their third single David Byrne’s Badside, and the EP.

The post Watch this: Liverpool’s Courting release Grand National off their new EP appeared first on Louder Than War.