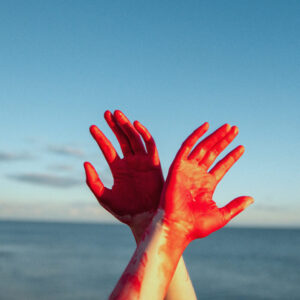 The Brighton four-piece musical riot that is GÈNN have just dropped their latest track, Feel.

Featuring just over four minutes of hazy psychedelia, Feel is a melting pot of future-retro sounds vigorously shaken and furiously served in GENN’s unique genre-blending style. It’s the second track to be released from their forthcoming EP Liminal, which will be out on the London independent label Everything Sucks Music (GHUM, Honey Joy, Charmpit), on 30th March 2021.

Feel sees GÈNN head confidently into experimental territory and embrace a more minimal sound. Vocalist Leona Farrugia shares an insight into the song, “The lyrics personify a relationship with drugs and the dependency that stems from that sense of escapism”.

Feel starts as a stripped-back percussive groove with doors-style riffs, a driving funk bassline and gorgeous smoky vocals. Fusing elements of heady shoegaze with laid-back blues, the track builds beautifully with a super catchy chorus until it reaches a frenzied drone climax saturated with multiple layers of effects. Gorgeous! Check it out below.

Their press release reads, “ĠENN (pronounced Jenn) is a trans-national, genre-blending, musical riot, ready to rock your ears and mess with your brain. They’re serving alternative post-punk madness with a fun twist, fresh out of their DIY framework and are based out of Brighton. The quartet is completed by Janelle Borg (guitar), Leanne Zammit (bass) and Sofia Rosa Cooper (drums). Together they’ve been shaking audiences to the core with their infectious tunes, and with the honest, relatable themes they attack in their tracks.”

Words by Paul Grace.  For more of Paul’s writing and photos go to his archive. Paul is on Facebook, Twitter, Instagram and his websites are www.paulgrace-eventphotos.co.uk & www.pgrace.co.uk