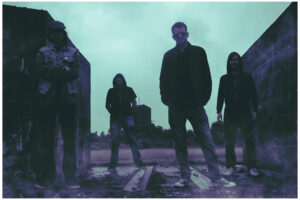 In a world reeling from a deadly pandemic, the U.S in chaos and 13,890 dormant nuclear weapons, the new single from Doom rockers Indica Blues imagines a near-future scenario in which current world events lead to all-out war and nuclear annihilation

Not surprisingly Indica Blues are a four-piece psychedelic Boom band from Oxford, and were once described as: ‘bong filling rock that is platinum heavy, but blessed with a melodic sensibility underneath it all.”

“This song is our vision of near future nuclear annihilation, written in response to the chaotic world events of the last four years”, says vocalist and guitarist Tom Pilsworth. ”We spent six hours in pouring rain at an abandoned cold war missile facility. with director Josh Horwood and his team, and he couldn’t of done a better job. We hope people enjoy watching it as much as we enjoyed making it.”

Since their formation in 2014 they have gigged with stoner rock luminaries such as Elder, Samsara Blues Experiment and Mars Red Sky.

Featuring eye popping art work from Brazilian graphic artist Cristiano Suarez, that record was in the top 5 Bandcamp bestsellers in the Doom and Stoner categories , and Number One in Desert Rock. It was picked up and played by alternative radio stations across the world, and listed on 2016’s Doom charts.

Rich Walker replaced Ed Glenn on drums, and a debut album Hymns for a Dying Realm, was released in 2018. This year the band announced they had signed to APF records and will release a second album, We Are Doomed in 2021, with Cristiano Suarez once again lending his unique artwork.

We Are Doomed is released on 12th February via APF Records. Pre-order now: https://apfrecords.co.uk/shop

The post Watch this! Doom rockers Indica Blues release new single We Are Doomed appeared first on Louder Than War.