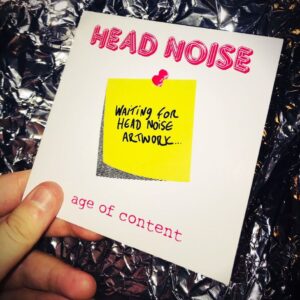 Head Noise are a New Wave Electro Art-Punk band from the South Wales Valleys. The band formed to perform at an art exhibition were described as ‘David Lynch meets the Pet Shop Boys’, which perfectly captures the surreal imagery meets pop sensibilities presented within the band’s music and live performances.

From there, Head Noise were inspired to start experimenting with their music, taking on elements of Post-Punk that developed into its own oddball Electro-Pop. The band are beginning to pick up a dedicated fan-base through their entertaining, funny and often surreal live performances and have bagged support slots with bands such as Wolf Alice, Public Service Broadcasting, Art Brut, !!!, John Otway and Electric Six.

Their new single, Age Of Content, focuses on out over-reliance on modern technology nowadays, which can often stifle the creative process. As the band say, “Everything is so quick and easy nowadays, that it can kill your drive to express yourself as all the available content is so vast and inescapable.” The song is available now on the band’s Bandcamp with the b-side, Tin Foil Troubadours, which is a fun little shouty romp about conspiracy theorists gone mad in today’s world.

Check out the video below.