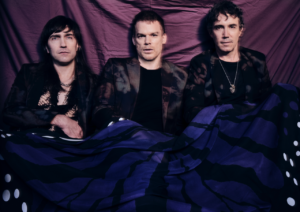 Dexter star Michael C. Hall and his band Princess Goes To The Butterfly Museum have released Armageddon Suite as the third single from their debut album, Thanks for Coming.

It comes with an eerie video building a mysterious narrative shot in classic filmmaking style, calmly cutting to the melancholy melody of the song.

“Armageddon Suite is about having a more heightened romantic sense facilitated by the world ending,” says Michael C. Hall.

Princess Goes To The Butterfly Museum is comprised of vocalist, lyricist, musician and Emmy nominee Michael C. Hall, who also starred in cult TV series Six Feet Under, The Wallflowers drummer Peter Yanowitz and Blondie keyboardist Matt Katz-Bohen. The band’s debut album includes previously released Cruel World, a cover of the Phantogram song that has turned into a fan-favorite and longtime staple in their live shows.

A theatrical sensibility is part of the trio’s DNA, especially in live shows, having met on Broadway during the hit production of Hedwig and the Angry Inch.

Michael C Hall is a longstanding Broadway performer, having played leading roles in Chicago, Cabaret, Hedwig and the Angry Inch and was selected by David Bowie to star in his musical, Lazarus.

Peter Yanowitz began his career playing drums in The Wallflowers before going on to co-found indie stalwarts Morningwood, and work with artists as varied as Natalie Merchant, Yoko Ono, Andrew W.K., Allen Ginsberg, plus Billy Bragg & Wilco, who enlisted him to perform on their seminal Mermaid Avenue collaboration.

Keyboardist Matt Katz-Bohen spent the last decade touring and recording with Blondie, as well as working with Boy George and Cyndi Lauper.