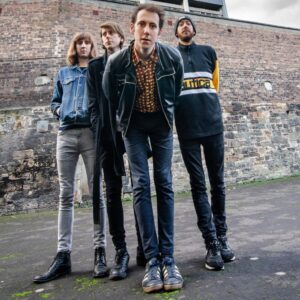 Highlands rockers Ded Rabbit have revealed a tantalising slice of what’s to come in the shape of their raucous new double single, Gotta Get Outta This Place/Blues Away.

Originally from Yorkshire, Ded Rabbit moved to the Highlands in 1996 and through the isolation and a developing love of music, the brothers started playing music together for over ten years. After moving to Edinburgh to study, they started working together in the studio, releasing their EP’s Wash Away, Wake Up In A Dream and Moving In Slow Motion. In 2015 the brotherly unit began their partnership with Glasgow based Rocket Science Studios, who have recorded the likes of Texas and Belle & Sebastian.

Speaking on the new single, the band say, “We played around with a few different feels for this track and decided the playful and up tempo vibe suited it well. We didn’t really draw inspiration from any particular music at the time but listening back I suppose bands like The Clash, Blur and Tokyo Police Club partly influenced this tune. It didn’t take many rehearsals for this tune to feel almost studio ready, this meant we pretty much recorded it live to capture the energy we had in rehearsals, apart from a few overdubs. Lyrically we took inspiration from having a shit night out, being skint and pissed off with feeling trapped in a dead end job and place. The lyrics were written in the studio.”

Check out the video below, or listen through Soundcloud

The post Watch this! Ded Rabbit release new video for single Gotta Get Outta This Place appeared first on Louder Than War.