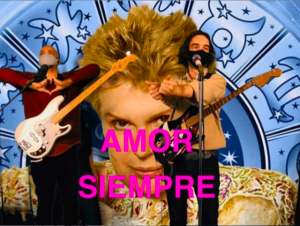 In Jonathan Bates’ decade of developing widescreen ideas in Big Black Delta, one fact has been irrefutable. “All of us suffer from the same insecurities,” says the Venezuelan singer/multi-instrumentalist. “All of us. Successful, not successful; none of us knows what we’re doing. The real shit is in lowering one’s defenses, so music can flow out freely and imperfectly.”

Weathering the twists and turns of this mortal coil ain’t easy. It’s a constant battle, something you have to work on and respond to regularly without losing sight of what’s really important. Bates found this out the hard way four years ago, when his father/best friend died and bad news became a daily occurrence — loss as a way of life. “I just cracked,” he explains. “I was engaged to be married, but that relationship ended partially because I was drinking a bottle and a half of Jameson a day. I’m naturally a skinny guy, but I ended up looking like the alien in Mac and Me. Honestly, I just wanted to die for about three years straight.”

The longtime Mellowdrone frontman/M83 collaborator is quick to clarify he’s not kidding. There came a point in the past four years where Bates felt he’d either have to fix his situation or end it. And the only way he was gonna move forward — healthier and happier than he’d ever been — was by giving up drinking entirely.

On the song, he says, “A couple of records ago, a writer had written some pretty nasty things about me and my music. I had never met the gentleman, but he went after my looks, dress, music, etc., enough to where it felt personal. Being the alcoholic mess that I was, I really let it hurt me in unnecessary ways. I didn’t have the understanding at the time to see that the embarrassment and pain that had caused was not necessary. So I imagined this sub floor of Dante’s Hell where you just had these air conditioned dorks floating around saying spiteful things like if Terry Gilliam directed Dune. So you have this guy working through some chords on a piano trying to write a song, and in come these floating critics, singing to you like a Greek chorus.”

Watch the video for Air Conditioned Dork below.