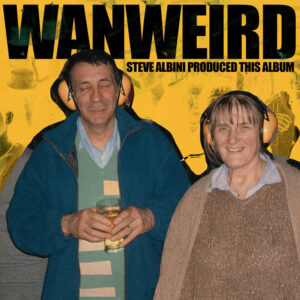 The 14 tracks of churning, stuttering punk noise sit uncomfortably under the title “Steve Albini Produced This Album” – he clearly didn’t, and its all the better because! Apparently, the entire thing was captured live on a 4-track cassette; as such its everything you want it to be – loud, abrasive, and dripping raw!

Title track ‘Steve Albini Produced This Album’ sounds like a live bootleg – you can imagine the mosh pit literally exploding, bodies colliding as Ron thrashes out the head splitting riff, Don pummelling the remnants of a drum kit, ahead of the lyrical tongues of ‘Shoogadabba’ an equally aggressive spasmodic workout concluded with unintelligible shrieking; similarly with ‘Phlegm’ which seems to incorporate the vocal talents of a local spice head.

‘Radioman’ grinds into your skull, a caustic bass rhythmically punching away, the entire thing a sub 3-minute garage punk collision that sounds like Powersolo covering Nirvana.

Nothing sounds like ‘Punkface’ a title that appears three time on the album – on the bands debut “When The Shit Hits The Wan” it made a solitary appearance, the follow up “Butch” featured three versions, whilst ‘Lonely Punk Face’ featured on the “Baby Factory” album, first time round its an 8-second vortex of face shredding noise that sets you up for both ‘Y’ and the 12-second (clearly prog influenced) ‘Punkface’.

‘Manbin’ is almost conventional in structure, built around a foreboding bass riff and primal drum kicks which entirely fails to set you up for the genuinely unsettling ‘Chippy Tits’ as Ron whispers “chippy tits” into the void – for those of you not from the Merseyside area, the affectionate term “chippy tits” is used for our rather portly City Mayor.

The entire album is like some sort post apocalyptic awakening, the music a wave of fits and starts, curious peaks and burst of discord – frightening and beguiling in equal parts.

And, why does Ron still look like a sex pest with a fetish for Björn Borg?