Various – Taking Some Time On 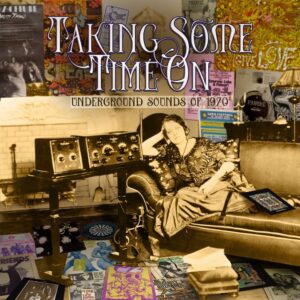 New collection from Esoteric subtitled Underground Sounds Of 1970, bringing together much of what was happening in progressive, hard and art rock during those formative 12 months. Artists featured include Deep Purple, Hawkwind, Kevin Ayers, Family and The Pretty Things. Ian Canty sets a bit of time aside to take in the post-psychedelic UK music scene…

As 1969 drew to a close, a new sense of realism flooded into the underground of UK popular music. It has become perhaps a bit flippant to say that the rose-tinted idealism of the latter part of the swinging decade swiftly dissipated under the shadow of the tragedy at Altamont and the Manson Family murders. But this statement no doubt had a fair element of truth in it, as the naïve notions behind flower power took a hefty blow. The seemingly endless realm of opportunities that psychedelia appeared to offer had already started to decline after the summer of love, with the more fanciful aspects of optimism that accompanied it beginning to look decidedly quaint by 1970. A hard-bitten, cynical feeling became a dominant feature of the UK in general and the rock scene was not immune to this.

Despite the onset of these somewhat reduced circumstances, many bands and artists were still seeing how far they could push things in the spirit of experimentation. The underground almost became a genre in itself. This is something that the parade of progressive bands, arty musos, hard rockers and politico upstarts that populate Taking Some Time On, a new CD set covering 1970, seeks to illustrate.

The collection begins with the riffy and very enjoyable title track by Barclay James Harvest. If you had written them off post year zero as mild-MOR types, you will no doubt be surprised at how much Taking Some Time On has in common with the Madchester sound of 1989. Following on in similar, “debunking their current reputation” fashion are Fleetwood Mac, a different band with Peter Green at the helm on the tough blues rock of The Green Manalishi (With The Two Prong Crown). Deep Purple’s Black Night will be of course familiar to most as it is gone down as a heavy rock milestone and it is followed by a couple of prog pop masterclasses in Refugee, by John Lydon favourites Van Der Graaf Generator and Geordie heroes Lindisfarne’s Lady Eleanor.

Atomic Rooster are caught in a laidback mood in Winter, with high voice, rumbling percussion and pipes building slowly and skilfully. Hurry On Sundown, Hawkwind’s debut single, may be a long way from the space rock they later became standard bearers for, but it’s still a mighty good acoustic blues ‘n’ harp stomper. The breakneck fuzz of See My Way by Blodwyn Pig provides a welcome blast of energy after a series of more reflective numbers, which included Jethro Tull’s pleasant and folky top five hit single The Witch’s Promise. T2, an outfit with links to Bulldog Breed and Gun, impress on No More White Horses. This one positively fizzes, powerful strumming and hammering drums conducted with an almost heavy metal-style abandon, then coming right down to a pretty acoustic setting for the verses.

It would remiss of me not to mention Egg’s The Song of McGillicudie The Pusillanimous (Or Don’t Worry James, Your Socks Are Hanging In The Coal Cellar With Thomas), trailblazing the long song title years before The Freshies, furious drums and odd organ stabs making for a satisfyingly hyperactive art rocker. This disc ends in style with The Shadows and Captain Beefheart crashing head-on amid Apache Dropout by the Edgar Broughton Band and Patto’s very cool and explosive Sittin’ Back Easy.

Disc two of Taking Some Time On gets underway with the quite brilliant Singing A Song In The Morning by the mighty Kevin Ayers, off-kilter soul pop with massive appeal. Even so, it’s just a small sampling of Ayers’ huge talent. Warm and lovely keyboards herald the start of Traffic’s very catchy Empty Page and the gentle and stately UK top 30 single Sympathy by Rare Bird is totally disarming.

Though Locomotive had started with strong ska influences, even having a hit with Rudi’s In Love in 1968, by the time of the glistening prog pop of Rain they had altered beyond recognition. The change clearly suited them. Canterbury’s Caravan are represented by Can’t Be Long Now/Francoise/For Richard/Warlock, a suite of songs from their second album If I Could Do It All Again, I’d Do It Over You that shows a whole range of imagination and flair in the jazz rock riffage stakes.

The excellent Stray from West London show up with the classy late psychedelic pop of Around The World In Eighty Days and Family’s A Song For Me finds Leicester’s pride and joy in hard rockin’, grandstanding form. One can readily imagine them blowing the roof of a gig venue sky-high with this monster. The Pretty Things were, in my opinion, one of the very best musical groups this island have ever produced. Grass, their contribution to this disc, is a very cool example of how well Wally Waller and Phil May combined post-S.F. Sorrow, elegantly marrying up power and beauty. Procol Harum’s Whaling Stories has some great crunchy guitar from Robin Trower and reveals itself in both noisy and quiet sections to be stirring stuff indeed.

At the tail end of this disc we have two bands who arguably had to be present on any set attempting to cover progressive music in 1970: Wishbone Ash and Yes. Ash’s evenly-paced 10 minute plus Phoneix grants ample opportunity for the twin guitar attack of Andy Powell and Ted Turner to soar effectively and on this reflective piece they are very much aided by the nimble bass moves of Martin Turner. For their part Yes on No Opportunity Necessary, No Experience Needed are all about fast moving, keyboard-driven fun, with the western theme of The Big Country playfully tagged onto a Richie Havens number.

Named after the classic 1960s sci-fi series, Quatermass’ Black Sheep Of The Family starts off disc three of Taking Some Time On fittingly comes with a very futuristic intro, before morphing into a wailing and attractive slice of blues rock ‘n’ roll. They were led by singing bassist John Gustafson, who also featured in The Big Three and Roxy Music among others. Dave Edmunds’ band Love Sculpture give us an ornate post-psych pop wonder In The Land Of the Few, the opening track from their second LP. They return at the end of this disc to regale us with the rock-solid Why? (How – Now).

Things May Come and Things May Go, But the Art School Dance Goes on Forever by Pete Brown and Piblokto! has neat echo effects on the guitar sound which jousts with the keys until tailing off at the end into Dixieland jazz of all things. Fresh from their stint in prog mainstays King Crimson, McDonald & Giles don’t stray too far away from their previous band’s sound on the rhythmic Tomorrow’s People – The Children Of Today, but it is still a goodie.

Emerson, Lake & Palmer are another band who had to be here and Lucky Man, their offering, was apparently written by Greg Lake as a schoolboy. It’s a flowing piece of pop quite unlike their later, more bombastic offerings. Kevin Ayers, this time accompanied by his band The Whole World, give us the punky Lunatic’s Lament and the big and soulful Three Sisters by Affinity swings nicely, with the added bonus of Linda Hoyle’s excellent vocals, a joy to hear.

We reach the final section of Taking Some Time On with High Tide’s busy and nicely unusual post-psych folk rocker Blankman Cries Again. They were a band with links to The Misunderstood and Hawkwind, but the fresh and bracing sound they achieve here is what they deserve to be remembered by. With its relentless violin this tune reminded me a little of the great King Of The Slums and the track concludes perfectly with a bloody great explosion. Next Stray gives us another gem in the fiery All In Your Mind and Michael Chapman’s Soulful Lady rocks along in a steady fashion.

Curved Air are always a delight to find on this type of comp and this time out Situations ensues from a serene basis and then fleshes out with strings into a beautiful and inventive symphonic rocker. Family are again found in incendiary form on a live Good News, Bad News and The Pretties’ October 26 is an effortlessly cool drift of a song with a ringing guitar piece. Love Like A Man is a fairly routine blues rocker by Ten Years After, but What? by The Move shows the shift of power the band underwent, with Jeff Lynne’s ornately orchestrated sonics taking centre stage. It feels entirely right that Yes bring down the curtain on Taking Some Time On with Jon Anderson’s pleasing rhythmic shaker Astral Traveller.

Presented in a sturdy and well designed clamshell box that helps to give Taking Some Time On a truly weighty feel, this set could well work as an attractive starter pack for anyone keen to dip a toe into the more cerebral strands of early 1970s UK rock. I found this on the whole a very enjoyable collection, the only real criticism I can think of is that perhaps it would have been enhanced by having more bands and artists included, rather than a fair few featuring twice. Nevertheless most acts acquit themselves admirably. There is very little of the showing off for its own sake which became more prevalent later on, here things are all kept reasonably fresh. All of which goes to provide lucid picture of an inventive underground music scene and there’s many a twist and turn that may both surprise and delight.

The post Various – Taking Some Time On – album review appeared first on Louder Than War.