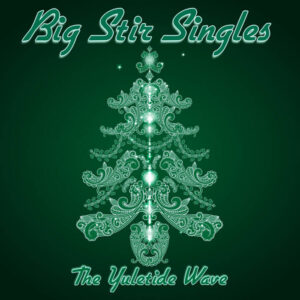 Seasonal outing for the Big Stir Digital Series, with such artists as Kimberley Rew & Lee Cave-Berry, Spygenius, Anton Barbeau and The Brothers Steve donning Santa suits and spreading their own unique type of festive cheer…Ian Canty decks the halls from a shopping trolley…

Christmas records are rum things on the whole. There was a time when a successful yuletide disc would set you up for life – for example take Jona Lewie’s Stop The Cavalry. In a just and fair world of course Jona’s one of a kind musical flair would have been amply rewarded anyway and wouldn’t need a yearly financial top-up from that single, but I digress. In recent years the Xmas record has lost a fair amount of its allure. The same old songs from way back are played to death and beyond and by the first week of December most of us are heartily sick of seeing Mariah Carey fart around with some dodgy Captain Birdseye wannabe done up as Santa Claus.

To make a convincing Xmas waxing today I feel it is necessary to demonstrate a clear ability to see both the pros and cons of the season, whilst capturing the mood of celebration without being overly mawkish and sentimental. It is so easy to do one without the other and/or err on the saccharine side, even for very steady hands at the game (remember Squeeze’s Christmas Day?). Even more difficult is putting together a whole album of these things. Are there many long players cut with Xmas as subject matter that bear up to close scrutiny and also could be reasonably played for pleasure elsewhere during the calendar year?

It’s a pretty tough ask. But if anyone has a shot at reviving the humble Xmas disc in this day and age, the folk at Big Stir must be in with a shout. The home of the hits for your heart, their multi-talented roster would surely have a chance of striking a balance between seasonal cheer and thrilling, fun pop music. Which is a good thing, as The Yuletide Wave has arrived, an album full of festive songs that has been in the works for a year or more. So let us inspect it, to see whether or not they have managed to pull it off this tricky feat.

Nick Frater helps gets things off to a flying start with Wash Your Hands Of Christmas, which is a delightful evocation of Phil Spector’s Xmas Wall Of Sound and also manages to pull off the trick of being a thoroughly festive tune, as well as a smart lyrical put down of the very odd times of 2020 too. The Brothers Steve follow with the carefree strum I Love The Christmastime. They are the one band with two tracks on The Yuletide Wave, cropping up again just before the end with Listen Up! It’s Christmastime, tender guitar pop par excellence.

Kimberley Rew of Soft Boys/Waves fame teams up with Lee Cave-Berry on All I Want Is You For Christmas, which feels like prime Rockpile steaming along in good-time full flight. The 12 string-style jangle of Librarians with Hickeys’ version of Christmas In Suburbia , originally by Cleaners From Venus, is fresh and includes the first sign of sleigh bells (but far from the last!) in a dreamy and infectious concoction. Next come The Stan Laurels, aka John Lathrop, a one man band from Austin, Texas. Their (or his) number Noche Buena is beautifully constructed pop music with a real kick, right up to the delicately arranged ending.

I very much enjoyed hearing Spygenius’s excellent album Man On the Sea earlier this year (reviewed here) and their track here Revels Without A Claus doesn’t disappoint. In fact it could well be my favourite of the whole album and that is saying a lot. A musical panto (in their own words) or more a music hall send-up of fake Yule with slashing guitar and a vocal/shotgun coda. It concludes “I wish it wasn’t Christmas everyday”. Here Spygenius are witty, silly and subversive in the best possible way, with the song packed with great lines and a healthy dose of cynicism. Impressive stuff.

Will You Turn Up (For Christmas) by Irene Pena follows a neat surf rock/indie vein and The Bobbleheads’ Groovy Time Of Year is a swaggering rocker with a real punch to its rhythm. The Forty Nineteens do good things with the catchy loping stride of It’s Christmas Time Again and All I Want For Chanukah Is A Ukulele by Alison Faith is a total charmer. Chicago’s Athanor aren’t an act I’ve come across before, despite being originally formed way back in 1973, but the laid-back drift of I Remember You On Christmas is enchanting.

Anton Barbeau’s edgy pop gem Xmas Song is yet another testimony to his talent and Kai Danzberg & Scott McPherson team up on a great novelty in The Day Before Christmas. Dolph Chaney’s simply titled Christmas, with drones and a folk guitar strum, is a fine meditation on the passing of the years, something that harks back to the tradition of taking stock in the middle of the winter. Broken Gnome by The JAC has a fully-realised and easy charm and Utah Winter by Addison Love is simply an elegantly constructed beaut with cool vocal harmonies.

The Decibels Angels’ We Have Heard On High is a fun Xmas reboot of garage punk classic Gloria and Merry Christmas by Kelly’s Heels With Steve Rinaldi has r&b right at its base and ample emotion, plus some biting guitar lines too. Wasting All Her Christmas Time by the Big Apple’s Stillsouls is pure driving pop/rock and Michael Simmons does Frank Sinatra’s Christmas Waltz ably. Finally we have the excellent Blake Jones & The Trike Shop’s rousing String Lights And Hold On, which had me stomping right on to the end.

The Yuletide Wave is pure joy, with the 22 tracks adding up to shine a light on all the perks and pitfalls of Noel. Loads of different sounds with a large helping of wit and verve and above all, tonnes of truly memorable melodies. It even gave this old Scrooge a rosy glow and is just the tuneful tonic after the battering most of us have taken this year. Though this Christmas will be necessarily downbeat for the majority, The Yuletide Wave will yield the listener a more than fair share of cheer – its catchy tunes and well-sussed songs will brighten even the dourest of winter of days.

New artist of the day : Nachtmusic ‘the 2021 inter zone between Kraftwerk and Giorgio Moroder’