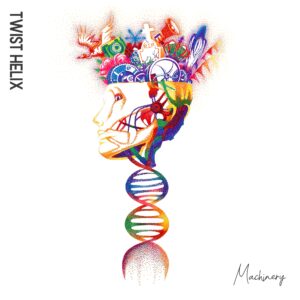 In their latest album Machinery, Newcastle’s trio Twist Helix offers angsty, synth-heavy send-ups to sexism and to the music industry. And like the best electronic music, they’re all tracks that make you want to dance.

If you long for clubs and dance parties featuring new wave sounds and the pulsing, sonic buzz of electro synth-pop, you’re going to be ecstatic to discover Machinery. This second album from Twist Helix has track after track of songs that all seem like hit singles. Diving deeper into the music, the lyrics have the band members taking their work in a definitively more political direction.

Moving seamlessly between English and Spanish, lead singer Bea Garcia highlights the problematic nature of the current music industry and the ways in which sexism, xenophobia, and other forms of prejudice damage society. In Garcia’s own words, Machinery aims to “pick apart the workings of the music industry, and to try and explain it to our audience as we experience it—not just the product you see on stage.” Accordingly, Garcia highlights, “the album ends up touching on themes of exploitation (Vultures’, the shallowness of consumer culture (Frida Kahlo), how human relationships become disposable (Festival Season), chauvinism and the lack of gender diversity (Ghost, Louder), and finally the misunderstanding of culture and the folly of nationalism (Good Night Little England).” Indeed, as drummer James Walker explains, “for us the music industry isn’t just bands and songs—it is a system of cultural product which, when put under a critical lens, gives as revealing an insight into our society as the product itself.”

Each of the songs has sonic resonances with earlier synth bands, especially calling back to New Order, but the music on Machinery is also moving forward. For Twist Helix, those connections to 80s synth-pop and new-wave sounds from acts associated with the “Second British Invasion” and “La Movida Madrileña” are present, but the band also want to forge new ground. Garcia says Twist Helix is “probably just as much influenced by 00’s indie as by retro synth, the blog culture, and the MySpace moment that blew up in our teens,” and bassist Matthew Barron focuses on the importance of “reminding people that not all synth music has to be a pastiche of the 1980s—it keeps evolving and growing.”

Machinery’s graphic design is also stunning, with rainbow-colored visions of DNA helixes giving rise to new visual forms. Each song has its own design, thanks to the artistic vision of Natalie Heaver.

Twist Helix currently has plans to kick off a return to live shows on February 27, 2021, supporting Parralox at FAC251 in Manchester, with future gig plans at Springkell Live in Dumfriesshire, Twisterella in Middlesbrough, and Solfest in Cumbria in the summer.