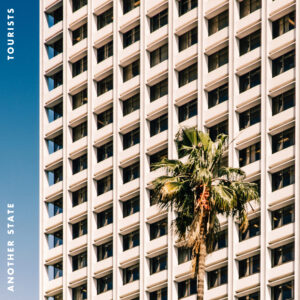 The inviting first album from the Torquay-based Tourists calls back to the past with its potent synth tracks and frenetic drumming, all while offering a distinctly modern sound.

Another State is a carefully constructed entity, a whole – each track feels as if it’s in dialogue with what came before and what ultimately follows, both in language and sound. It’s ultimately a sonically driven record, with lyrics highlighting some of the melancholy themes imbued in each song. Silent Type, the first track, gently draws us in as it illumines the interplay between aural and visual cues that drive Another State

The lyrics fade out about a third of the way through, perhaps an ironic nod to the song’s title. Yet the instrumental sounds that follow are anything but speechless as they envelop us in an atmosphere originally sculpted by bands like the Cure, the Smiths, and Echo & The Bunnymen. As Silent Type recedes, songs like Align and Smokescreen come in to pay homage to Stephen Morris’s drumming and Hooky’s bass lines, reaching out to listeners who wonder if there’s any good music getting made these days. The tracks feel like they were carefully crafted by a band listening to a lot of Joy Division and New Order. Those nostalgic sounds pick up again on Blindside, more than halfway through Another State. When I asked the band about their musical influences, I mentioned some of those 1980s sounds that emanated from the recorded. The band replied:

“Yeah, those influences are in there. Some of these songs have been about for quite a few years, some more recent. So the list of bands and influences over that time span is huge…the post-punk influences have always been there underlying, and we love bands like Joy Division and Gang of Four. Then more recently, we’ve taken inspiration from bands like Preoccupations, Froth, Beach House, The War on Drugs, Slowdive, Interpol, NEU, Lower Dens. Those kinds of influences are all in there on the album I think.

As if speaking directly to Blindside through song, the follow-up track is an instrumental Black Friday, introducing more of the shoegaze and dream pop elements that are also at work across the album. Another State ends wistfully, speaking softly to the ephemerality of music, of space, and of time:

The video for Another State draws on those themes, full of fading footage and aging sunlight.

I speculated that the band’s spatial roots in Torquay materialise across their music, and they gave weight to my suspicions:

“Our music has definitely been influenced by where we’re from and the slow pace of life we have here in Torquay. We tried to pay tribute to that with the video for our recent single Another State. It’s quite a chilled, dreamy track that we recorded in the summer, and I think it probably reflects us as people and where we’re from the best of all these album tracks (we recorded the guitar outside so you can hear the seagulls in the intro!). We have always felt in our own bubble down here, not overly influenced or constrained by other bands or any sort of scene, so it’s enabled us to stay authentic and do our own thing.”

While the album certainly has a coastal feel, some of the darker tracks also have a grittiness to them. Daniel Schlett (The War on Drugs, DIIV), perhaps unsurprisingly, produced Another State. I asked the band about Schlett’s influence on the album, and they spoke about his distinctive approach:

“It was a real privilege to work with Daniel, who’s really on the top of his game. We knew what we wanted with this record—to capture our live sound and to get a more atmospheric, raw, dynamic feel with the production. We knew from his previous work with bands like DIIV and The War on Drugs that he would be the perfect man for this aesthetic, so we got in touch with him and sent him some tracks…He agreed to mix the album at his studio Strange Weather in Brooklyn, New York, and he totally nailed it.

The band is desperate to return to playing for crowds in a post-pandemic world. When it comes to gigs and live music, their words say what we’re all thinking:

“I think it’s what we all need. To be in a room together again, enjoying live music, embracing each other. It’s what makes us human. I don’t think anyone will take that for granted again after this whole Covid experience.”

The post Tourists: Another State – album review appeared first on Louder Than War.