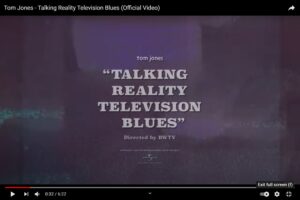 He needs no introduction. The pop-cultural Prince of Wales.  The Voice. A friend of Elvis. 58 years in the business. From It’s Not Unusual to Kiss to Sex Bomb he bestrides the decades like a colossus.

And, 2021, at the age of 80, he has done it again. The flagship single for forthcoming album Surrounded by Time, a cover of Todd Sniders “Talking Reality Television Blues”. It’s utterly brilliant – really. ( Well, I think it is)

Almost a Stone Roses drum shuffle, Beck style blues guitar and a Bob Dylan style vocal. None of his soulful ‘full-throated baritone’ but a mischievous gravitas, sounding at times a bit like fellow countrymen Richard Burton and John Cale.

Of course there is a bit of a contradiction, what with television always having been a big part of Tom’s success. He is still a judge on the Voice (UK).  But Todd Sniders lyric is incisive and astute with a dash of Gil Scott Heron The Revolution Will Not Be Televised, Disposable Heroes of HipHopracy’s Television Drug of The Nation, Beck and Dylan all in the mix.

It’s a cool song and Tom performs it well. And it’s probably not what a lot of his fanbase were expecting.

Toms forthcoming album has versions of The Windmills Of Your Mind,
Popstar by Cat Stevens/Yusuf Islam), Dylans One More Cup of Coffee and This is the Sea (a Waterboys song) and yeah, I can’t believe I’m saying this, but I’m looking forward to it.

Link Tree to The Song – choice of outlets.

Link Tree to The Album – choice of outlets.

Edit / P.S.  And yes, before anyone else says it, musically it does share something maybe with ‘I Might Be Wrong’ by Radiohead. Not a song I was familiar with. (GB)