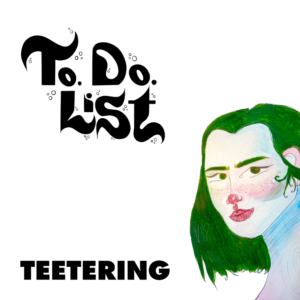 Carmina Marlena Isabella Budworth – aka to.do.list – is a Manchester musician with soul, grit, passion and ambition. Teetering showcases all of this in spades. Sam Lambeth reviews.

When Wolverhampton producer Gavin Monaghan was offered the chance to master to.do.list’s new song, he said two sentences – “yes” and “email it now.” Monaghan, one of the finest producers in the country, knew of to.do.list’s genius. Now it’s the public’s turn to find out.

Teetering is the latest taste from the Mancunian muso’s eclectic melody box. Growing up in a house filled with eclectic sounds and ambitious music, Teetering displays all of to.do.list’s influences without ever sounding cluttered or forced.

Half Argentinian tango, half espionage movie soundtrack, Teetering is polished and perfect. Recalling the soulful sounds of London Grammar and the giddy rush of Florence & the Machine, to.do.list’s surging vocals soar sublimely over infectious drum beats.

Recorded at MADFOX Studios in Manchester with the great Tatye Nickols, to.do.list’s talents are brought to the forefront, as well as her experimental edge.

Of course, Teetering is about falling. But this isn’t about your favourite mug being placed perilously close to the edge of the coffee table. It’s about the uncertainties of lockdown, having one foot in freedom and another in exile.

It’s a perfect introduction to a musician that is brave, bold and ready to take over the world. Being awesome isn’t on her to do list – she’s already accomplished it.