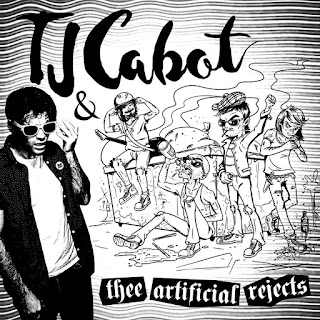 Alien Snatch Records has saved 2020! The venerable German label has released the debut album from Canadian underground sensations TJ Cabot & Thee Artificial Rejects – an 11-song long player that features several tracks once feared to be lost forever. The tale of TJ Cabot & Thee Artificial Rejects is one filled with intrigue, heroism, controversy, and shocking violence. Cabot, a notorious multi-instrumentalist and talented hellraiser, fell into the company of drunken libertarians Millhouse Deville, Rooster Targett, Skookie Tobin, and Leblanc Road Leo. Plans were hatched to wreak havoc up and down the eastern coast of Canada. Manifestos were to be written. Bridges were to be blown up. Sovereign states were to be established. As the drink flowed, the group decided to just record some songs instead. This past spring, Demos Recorded in the Anus of the Maritimes was released to tremendous acclaim. And then trouble ensued. Squabbles over intellectual property and the political direction of the group led to the best songs on the album being pulled from the digital release. The world mourned. People read my review and wondered where these songs I referenced had gone. Not content to sit around and allow a potentially classic release to fall into the dustbin of history, Daniel from Alien Snatch took decisive action. Armed with potent beverages and rare Von Zippers vinyl, he crossed the Atlantic by ship and descended upon the Maritime wilderness to broker a deal that would satisfy all parties. And today songs such as “Occipital Neuralgia”, “I Am The Enemy”, and “Vile Converted Mind” return to permanent circulation. Depending on your current location, you may even witness celebrations in the streets.

It’s only appropriate that Alien Snatch Records has brought TJ Cabot & Thee Artificial Rejects’ debut album to the world at large. And that’s because this sounds like a record that Alien Snatch and Rip Off Records may have wrestled each other to release in the early 2000s. It’s informed by equal parts ’70s punk and proto-punk, ’90s garage punk and budget rock, and modern-day lo-fi trash. Recorded with just a single $5 microphone on a decade-old laptop, these tracks are super raw and about as lo-fi as it gets. Daniel, in his inimitable style, references everyone from the MC5 to the Spaceshits to Kajun SS to Gino and the Goons to the almighty Pack on the album’s press release. And my tender ears pick up on touchstones ranging from the Stooges to the Saints to the Angry Samoans to Sick Thoughts. This just has the feel of a garage punk record from that prehistoric age when YouTube did not yet exist and nobody under the age of 18 used text messaging. Cabot and his (literal) partners in crime tear through mostly 1-2 minute songs that run the gamut from vicious (“Numb the Mind”) to trashy (“On Off”) to positively pummeling (“Cold In May”) to kinda almost poppy (“Nowhere To Go”). Who needs fancy equipment or a fourth chord when you can bang out some noise as righteously ferocious as this? I’m not saying that records like this never get made these days. But when they do, Alien Snatch is frequently involved. I would recommend TJ Cabot & Thee Artificial Rejects to fans of Phone Jerks, although it should be noted that a fierce, contentious, and highly territorial rivalry exists between the two bands. You know how intense things get in the Maritimes. Suffice it to say that this is a debut LP that will be very much in contention for the honor of my #1 punk rock album of 2020. If it takes the top spot, it will have to supplant another local band that shall remain nameless for the moment. What in god’s name is in the air up there?!