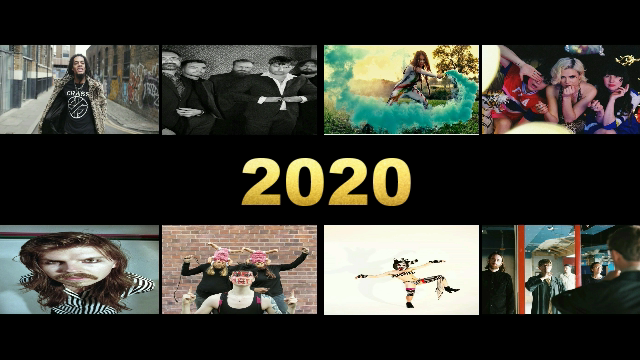 Keith Goldhanger rounds up a few of his personal favourite new acts that appeared during 2020.

It’s impossible to cover everything nowadays. Just by looking at our own social media contacts is enough to realise that most of us all have different favourites on our lists. Not just songs but whole lists. Having spent the past month collating some of my friends favourite tunes of 2020 (playlist here – not too many songs were mentioned twice and none were mentioned three times!) I’ll highlight my own top 101 tunes below. A few decades ago I’d imagine many of the names would appear on both lists;

2020 began as many other years have begun yet followed a pattern similar to one of those long-drawn-out songs by Black Country New Road. It began just as ordinary as any previous year but became a bit difficult to find any enjoyment from it the longer it went on.

Thank heavens we’ve seen the end of it. However, no one has yet suggested that next year can’t be any worse.

January came and so were regular trips out in the evening to small rooms above or behind pubs to watch free shows featuring bands many others believe they’ll be able to charge decent money for in months to come (aiming towards those that don’t take any notice of these articles). Some of our favourite venues in East London were implementing the one in one out system as early as 7PM and unless you’re a lorry driver in Dover the evenings spent amongst strangers queuing up waiting for the wave through a door still appear to be a long way off for many of us.

In any other year, bands such as WORKING MENS CLUB would have had a lot of us dancing around to their music by the autumn. We came, we queued, we didn’t get in but the album is certainly worth dancing around the kitchen to.

At the start of 2019 some of us were beginning to take great pleasure in hearing DRY CLEANING‘s Florence Shaw talk her way through each song and by the end of 2020 we seem to be surrounded by those that can’t be arsed to sing anymore. We were introduced to SKINT & DEMORALISED, whose Superheroes track remained high on the list of tunes we kept listening to again and again. Little did we realise that by the time 2020 came to a close many of us would be buying tickets for gigs by bands such as YARD ACT six months in advance, dancing around the living room on a Saturday night to LYNKS (formerly Lynks Afrikka) singing a Courtney Barnett cover version in the style of 80’s pop legend Divine (or the even better How to be Successful, a tune that also sits quite high on my own list of favourite tunes introduced to us this year) and loving the Jason Williamson collaboration with THE INTERNATIONAL TEACHERS OF POP. We didn’t expect we’d all be so united in our love for the fabulously intense BOB VYLAN, whose We Live Here came a few weeks before Black Lives Matter became another contributing factor towards establishing a distinction between the ignorant and the wise around us (but not literally around us of course. Unless there were six people from the same family on a Friday waving a flag).

BENEFITS and DEAD SHEERAN also added to the intense angry lives we were now experiencing. With no gigs to prepare for, it was up to many bands to prove their existence by giving us a piece of music we simply wanted to listen to over and over and over again. Many bands social media platforms went quiet but many others have managed to introduce themselves to us despite the fact that many of us can’t remember the last time we were anywhere close to holding a cloak room ticket. Many bands arrived and many made music we really did want to listen to over and over and over again (I won’t stick a Hot Chip reference in here – oh, I have!). Finding new music didn’t seem to be any more difficult in 2020 and at a time that we needed it more than ever many of us us found ourselves finding even more websites & radio shows to continue in highlighting what a wonderful creative world we live in.

The doors leading to a world that make the things we hear on the radio a reality closed at the end of March. SPORTS TEAM released their debut album and sold copies on the back of the hundreds of shows already under their belts. THRILLHOUSE threw us two or three tunes without even playing a show and COLOMBIA MILLS arrived having played a few shows previously in those tiny rooms we think of as our second homes but unfortunately not when all of us were present.

Despite the ‘short’ year, one of us managed to see TINA at least three times, ALIEN TANGO, OCTOBER DRIFT, CHINA BEARS and POZI more than once along with the one massive JOHN GRANT gig at The Roundhouse. The fabulous COUNTY LINE RUNNER managed to appear in front of some of us before the doors that we enter to take us into our special spaces closed and have still not reopened.

Yes, it’s been shit but it’s been not as shit as it could have been thanks to the people who (presumably) don’t have a Netflix account and are therefore spending every waking hour writing and recording new tunes instead of watching documentaries about lions, drama’s about chess and football with overdubbed crowd noises. It’s these people we all need to thank but can’t thank in the ways we used to. We’ve really missed not being able to see many of these music makers in the flesh or even shared a pint or two with. During 2020 some of us have experienced online shows (I hosted 16 myself if you fancy a look) but standing shoulder to shoulder whist tutting loudly at the couple having a chat about the weather in front of you as our favourite bands play our favourite songs can never really be equalled.

Some of the questions one of us keeps asking to himself is how have those people coping who have been providing the music been doing all year instead of sitting in tour vans eating cold pies at motorway service stations? Not just the bands but the bar staff, the sound engineers, merchandise sellers, managers, photographers etc….. and where would some of these acts be if it wasn’t for the restrictions brought into our lives since the end of March? So many questions, so many stories to tell and yet still no certainty that 2021 will be any different.

Dublin’s COLUMBIA MILLS one suspected when hearing the bands second album CCTV may have been up on the big stages by now. We may never know but this is an album that was made for big stages in big fields as the sun beats down on our sunburned backs. Yorkshire’s finest YARD ACT would have at least appeared under the golden arch of London’s Shacklewell Arms by now we imagine. Here’s a band one of us has a ticket to see once the great reopening happens. Their hard to get hold of 7″ is worth buying a new turntable for.

Summer didn’t happen. We never got to see HOT CHIP headline Standon Calling but they did provide us with a soothing late-night chill out album for those of us now in the habit of going to bed just as the sun comes up.

One reason for the late nights in 2020 have been the new show times for our favourite Radio show Xposure (Radio X) which now broadcasts 11pm – 2am Friday and Saturday. Six hours of new music (we used to have double this) for those of us that like to be kept abreast with the new. Louder Than War’s own Nigel Carr has been providing us with weekly shows on Radio Alty that often include the tunes you will have read about on Louder Than War and many of us have found time this year to listen to the scores of podcasts and mixcloud radio shows broadcast from as far afield as Australia New Zealand Seattle and Norfolk.

RABIES BABIES, who have been gigging for over 20 years and never released anything finally released their self-titled debut EP

NANCY came via the Inbox and gave us some fabulous new psych-pop tunes recorded in a way that made us feel his studio was located in the bottom of a swimming pool, TTRRUUCES have an collection of material that needs trawling through even more in the new year, NOVA TWINS album cleared any cobwebs from isolation ears, REAL(S) debut album was worth the wait, CRUEL HEARTS CLUB seem to have appeared from nowhere AMY MONTGOMERY goes onto the Tips of 2021 list. FRAUDS we need to hear more from too.

By August we’d given up cutting our own hair, forgotten what the alarm clock sounded like and found ourselves debating on a Zoom call the career of Ricky Gervais. We’d watched so many day time TV shows and were reminded that a quad bike has four wheels, what Lonnie Donegan’s dad did for a living and counted the number of times the word Lager is used on Underworlds Born Slippy (16).

But the music kept coming and the music that came saved many of us from going insane. You can recognise the people in our lives that don’t seem to take advantage of this past time. They’re the one’s we all tend to avoid. They’re the ones who have often thought we’re slightly strange but as the lyric of 2020 goes, ‘It takes real guts to fake being nuts’ and if this is what being nuts is all about then some of us are all for it. In the meantime we’ll continue to stay home, crank up the dials on the radio, pray for a continuous internet connection and wait patiently for even more new music to arrive in 2021 and hope we can maybe get to meet some of these people one day.

There is a future but the question is what will it be like and when will it start?

The post Things we didn’t know a year ago : 2020 review appeared first on Louder Than War.