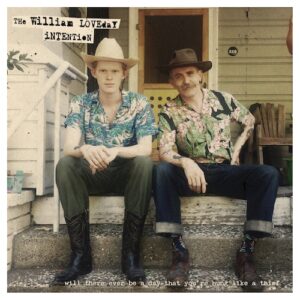 The William Loveday Intention: Will There Ever Be A Day That You’re Hung Like A Thief?  (Damaged Goods) 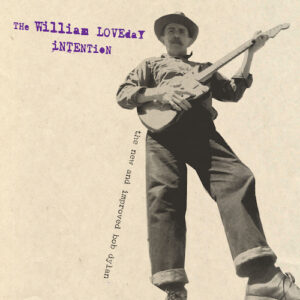 The second and third in a series of four brand new studio albums… The first was reviewed here. For the uninitiated, The William Loveday Intention is the latest band put together by Billy Childish. The four album project includes guest appearances by James Taylor (The Prisoners, JTQ), Dave Tattersall (The Wave Pictures) and Huddie Hamper (The Shadracks) amongst others.

Billy Childish has found Bob! And so have I!

The New and Improved… is mainly Dylan covers, except two…

The whole of the second album, …Hung Like A Thief? is ’65/66 Dylan in style, but Billys songs.  Heavy on the harmonica and with guitar-playing which is not ‘rock’n’roll’ for the most part, so I imagine is Dave rather than Billy playing. The singing is unmistakably William but somehow adopting a Bob way of getting the words across.

Taylors organ-playing gives the sound both a warmth and a strength.  Overall, it’s just beautiful. Respectful to Bobs original songcraft, true to Billys methods. Destined to be one of my most favourite Hamper / Childish / Loveday albums.

By sheer coincidence 2020 was the year I too discovered that I actually did like Bob. It was the song ‘I Am Multitudes’ from his latest Rowdy Ways album – which I really liked on first listen – because it made me laugh and I knew the title was from the epic poem Song Of Myself by Walt Whitman.

I only knew of the poem because Billy Childish had turned it into a three minute rock’n’roll song on CTMF’s Acorn Man – which I wrote about here.  It was the revelation that Dylan wasn’t entirely po-faced and serious, and that his songs had humour which was what finally broke my aversion to the man.

(I had tried to listen to him in the past but had always been put off by his voice… and like any ‘true believer in the lie of punk rock’ I had always dismissed a lot of music pre-1976. Dylan was for hippies, not for me.)

Billy is absolutely correct though when he points out that on “the live version of  ‘Shelter From the Storm’, Bob sounds like Joe Strummer singing. and that Richard Hell copped a lot of his style from Dylan.

Loads of bands that I’ve loved over the years: Subway Sect, the Psychedelic Furs, The Only Ones, early Bad Seeds, the Fall, Railroad Jerk have all had a Dylan influence running through their work. I’m glad I finally have a proper appreciation of the man. Like Lou Reed, it’s not all top-notch stuff, but its worth working thru the back catalogue to find the gems. Luckily, Billy can be our guide…

Will There Ever Be A Day That You’re Hung Like A Thief? is a bewilderingly brilliant album which has reduced me to tears and brought me great joy.  Some older Childish song-lyrics, some new, but the different musical framing makes the whole thing seem brand spanking new and fresh and alive.

Huddie Hamper (Billys son) being present as a musician for the first time (as far as I know) on his fathers work may have something to do with it.

The songs cover events & subjects Childish has covered before: The Day I Beat My Father Up is completely re-written to become I’ll Tell You Who I’m Not So You’ll Know Who I Am and is a absolutely brilliant. The narrative is given a poetic Dylanesque make-over and James Taylor plays a blinder.

I was under the sheets, living all my fears / the vampires were a-comin’. drinking from my tears, / the werewolves at the windows and spiders in my hair…..

Celebrating Weakness seems to be about a certain person who took a lot of Childish’s ideas and claimed them for their own and is as savage as it is poetic.  As a character-study in-song it is astounding. Transposed into real-life it’s brutal and unforgiving.

You Have Always Held Me  is probably one of the most beautiful and tender things Billy has ever written. He doesn’t bellow on this… I love the fact that it messes with the laws of time and space.  The object of his love has ‘always been with him’ even before they were born.

Will There Ever Be a Day That You’re Hung Like a Thief?  I’m guessing is a composite of songs about the object of Williams scorn over the years. The lines about ‘Oasis was the basis’ of their influence(s) rather than Hank does point to one particular self-mythologizing artist.

Chatham Town Welcomes Desperate Men is to my mind, the only one which doesn’t work as a song. Perhaps because I know the poem too well – a quite brilliant pen-picture of the town and its people. Maybe a Velvet Underground style backing would be a better fit?

I Don’t Like the Man I Am  and A Self Inflicted Wound are familiar words given a the new musical backing, but You’re The One I Idolise tops them and is sheer beauty in under three minutes.

A La Mort Surbite is a joyful trip to Brussels in the 80’s (a bar called A La Mort Surbite which translates as ‘the Sudden Death’.) where the narrator gets to sit in Jacques Brel’s seat. A definite highlight of the album.

If They’ve Got What They Want They’ve Got You is Headcoats song Every Little Bit of Me added-to and given a third-album Velvet Underground feel and Zimmerman-style vocal. The harmonica sends shivers down your spine and it’s a current favourite – personifying punk-rock grown-up and smiling at its past angry naivety – or something…

100 Yards of Crash Barrier is one of the best things Childish has written in my opinion – retelling the story of his fathers abuse but this time full of imagery and metaphor.  I was born a sickly price to that defective king..

As an album Will There Ever Be A Day That You’re Hung Like A Thief? is without a doubt a pinnacle in Billy Childish long ‘career’ in music.

Whether it will bring him to a wider audience -made up of Dylan fanatics and followers, I don’t know… Ironically some will probably think the same as I used to about Bob; ‘He’s good I suppose, but I can’t take to his voice’.

...Hung Like A Thief really does bring tears to my eyes…. it is a particular chord-change on the organ and the mouth-organ on a specific song that does it – and I really don’t know why….

As I don’t know the originals I can’t give an authoritative account – just observations and opinions which will hopefully be of interest.

The ‘new and improved’ is a bold statement. There are legions of Dylan-experts. What they will make of this project I really don’t know -or really care.

The ‘new and improved’ is probably a typically told-with-a-straight-face joke. It’s hard to tell with Billy unless you can see the twinkle in his eye or the smile curling under his moustache…

The only song I really knew before listening to this album was ‘Like A Rolling Stone’. I had heard Johana, Baby Blue and Pill-box hat obviously, but long since dismissed them as uninteresting. I still don’t think they are particularly great examples of Dylan at his best. Subterranean Homesick Blues and Desolation Row are far, far better in my opinion.

William Lovedays version of Like A Rolling Stone is fuckin’ majestic! It’s like a stormy sea with dips and swells and is sung with a roaring intensity and precise passion.  I would say that it actually does live up to the New and Improved of the album title…

One More Cup of Coffee – Utterly beautiful – exceptional violin-playing – Billys vocal is magnificent. Big and dramatic – not a song I’d ever heard before.  Arguably the highpoint of the album.

Visions of Johanna  Billy struggles a bit with the vocal on this. Sounds a bit like Mark E Smith singing Victoria.

Ballad of Hollis Brown  this reminds me of Firstborn Is Dead  era Bad Seeds -and Billy is on top form on this, he can sing the Blues convincingly.

It’s All Over Now Baby Blue  The vocal is offkey but he is obviously enjoying the song – the keyboards and bass playing are excellent and carry the song  – Billy double-tracks his vocals – for probably for the first time ever.

Blind Willie McTell  – House of the Rising Son is presumably the sister-song to this…. excellent version.

Positively 4th Street   Dylan-fans will probably not like this – as its Billy in full bellow rather than the nasal-delivery of Zimmerman.  I like it – but more for Jamies keyboard playing.  Not the best song on the album

Leopard-Skin Pill-Box Hat  I don’t like this song. Sorry. Tedious blues-chug about a woman’s hat.

She Belongs to Me   Nice but unremarkable song

If Loving is Believing  Bit of a 12-bar bluesy number – not the kind of song I’m massively fond of.  (Double tracked vocal again) Some great harmonica playing. Realised later that it’s a straight cover of a 1954 Sun Records B-side by ‘Billy ”The Kid” Emerson.  The Milkshakes also did the song with Mickey on vocals I am told by Dick Scum. The reason it is on the album?  the music makes up the False Prophet song on Dylans latest LP.

Lay Some Flowers on My Grave – Is a Blind Willie McTell song. Fabulous version.

Because I am a newcomer to the work of Bob Dylan it’s like a  huge revelation… that I like something I thought for years I didn’t.  Silly sod that I am.  Or maybe it’s that Billy Childish is ‘my Bob Dylan’. I am always interested in whatever he does; the paintings, poems, novels… because they are always fascinating and uniquely him. Full of integrity and brutal beauty. Forever the outsider.

These albums have made me feel like an excited teenager again – for which I am eternally grateful.

The post The William Loveday Intention: …Hung Like A Thief? / The New & Improved Bob Dylan -albums reviewed appeared first on Louder Than War.

Watch this! From Russia with love as Iamthemorning release new video