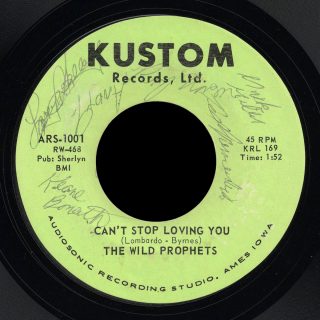 The Wild Prophets came from Ames, Iowa, about 35 miles north of Des Moines. They recorded one single on Kustom Records, Ltd ARS-1001, an energetic version of the Last Word’s “Can’t Stop Loving You” backed with “Do I Have to Come Right Out and Say It”, a Neil Young original with the Buffalo Springfield.

My copy is signed by the following members, which likely match the lineup on the record:

The Wild Prophets recorded at Audiosonic Recording Studio in Ames, and the record saw release in 1969. 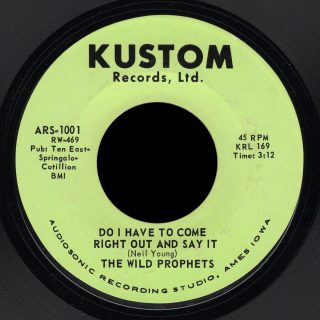 According to an informative website on the band that is currently defunct, the band played “in Mason City. The Cellar in Ames was a favorite with a good crowd in attendance every time. Other venues they performed at include the Starlite in Carroll, the Pla-Mor in Fort Dodge, the Dance-Mor in Swisher, RJ’s Lounge in Marion.”

The Wild Prophets broke up in 1973. Jacque Furman continued in music, but I have few details other than playing with Cris Williamson and Glen Yarborough.

I can find a few other Audiosonic Recording Studio credits, such as: