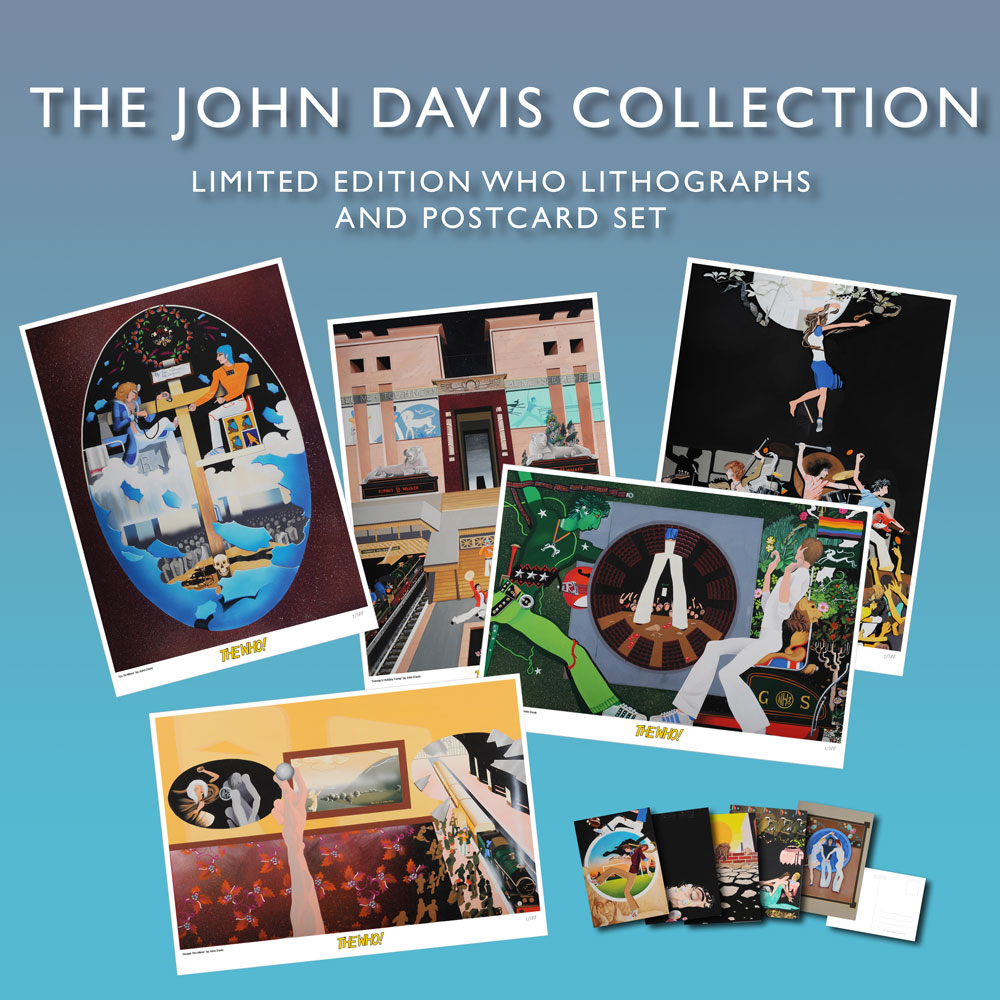 The Who celebrate the life and legacy of long-time collaborator John Davis with a selection of premium art prints in limited editions of just 100, featuring five of the artist’s most iconic paintings. Each design is lithographically printed on the finest Italian paper stock, hand-numbered in pencil and limited to 100 units globally.

Read John’s story below and pick up a piece of iconic Who memorabilia before it’s gone!

John Davis (1950-2006) became a Who fan when he was at art school in the mid-sixties and remained so for the rest of his life. In 1969 he bought a copy of The Who’s Tommy album and from there on he never looked back, following the band around the south of England to countless gigs and shows. On returning from each gig he began producing paintings illustrating particular Who songs which he’d heard the band perform. By the end of 1969 John had amassed a number of paintings and decided to travel up to London and knock on Pete Townshend’s front door, hoping to introduce himself and show Pete some of his work. “It seemed the logical thing to do,” said John. “I thought he’d be furious at having people knock on his door to show him pictures of Tommy.”

As it turned out, Pete welcomed him into his home, where John showed him his paintings and the two of them spent the afternoon in conversation before heading off to a Who concert in Croydon. Later, John held an exhibition of his work near his home in Hampshire which Roger Daltrey and Pete Townshend came down to see, resulting in various commissions of work including four paintings for the later-abandoned Who album Lifehouse.

The paintings in this collection of limited edition lithographs and postcards have been gathered from several works begun in 1973, and which later appeared in an official celebratory book, A Decade of The Who published by Fabulous Music in 1977 and feature stunning imagery inspired by some of the songs of Tommy and Quadrophenia and more.

Sadly, John Davies passed away in 2006 following a car crash near to his home.

BUY NOW FROM THE WHO STORE WHERE YOU CAN ENTER OUR COMPETITION WITH A CHANCE TO WIN A COMPLETE SET OF PRINTS! 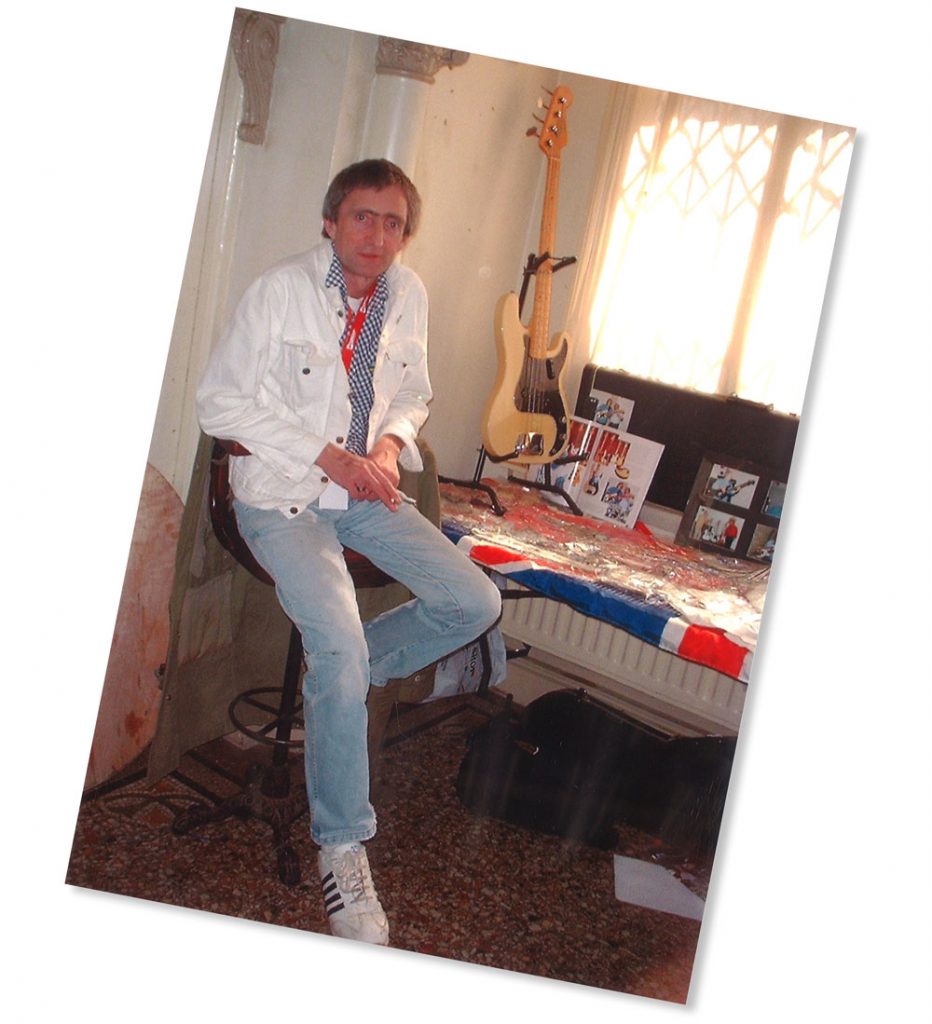 Richard: So Paul, I’ll begin by asking how you got to know John Penton Davis. Where and when did you first meet him?

PauL: Back in 1994, I was in a group of living history people where we’d dress up as Roman soldiers and we were doing a show at the Roman villa in Rockbourne, Hampshire and that’s where I first met him. He was hoping to join the re-enactment group and we became good friends. Over the following year we saw a lot of each other. John didn’t have any family as such and so we ended up spending a lot of time together – birthdays, Christmas and so forth.

Richard: And where did the link with The Who come in?

Paul: We were just talking about things one day and I happened to mention The Who and he said “Oh, I’ve done work with The Who. I did a book with them called A Decade Of The Who.” I thought he was pulling my leg, but then he brought a copy of the book over and showed me and said, “I painted all this artwork.” I was very impressed with what he’d done.

Richard: At that time, had you ever seen The Who in concert? Ever seen the band live?

Paul: No, I hadn’t, but sometime around 2000, John called me up and asked me if I’d like to go to see The Who with him for my birthday. I said, sure, I’d love to. So we went up to London, to Wembley on my birthday. John got complimentary tickets and passes from the box office and we went backstage where I met Roger and Pete and I met John Entwistle. And the three of them all signed my programme for me and I was absolutely blown away.

Richard: And, sadly, a few years later,  John was involved in an accident that took his life, wasn’t he?

Paul: In 2006 I had left the Roman re-enactment society but John was still a member and one day he set off with another member in their car to do a re-enactment at Chedworth Roman Villa just outside Cheltenham. On the way there, they were involved in a severe car crash and John was rushed to hospital in Swindon where he ended up on a life-support machine. He was really very badly injured. The police contacted me because he had no family, I was listed as his next of kin. They then asked for my permission to turn off the life support – the most difficult decision I’ve ever had to make.

Richard: I can imagine. A terrible decision to have to make.

Paul: His body was then donated to help others and by giving various organs, kidneys etc he managed to save the lives of six other people.

Richard: Amazing. And all that goodness came out of something so terrible.

Paul: Yes, it really was. And then later on, I discovered from his solicitors that John had made a will and left his entire estate to me. He had no family by then and I was the sole beneficiary. I had to go through all his possessions in his house. Amongst all his bits and pieces I found several portfolios of his paintings and artworks –  including all the ones in the book, A Decade of The Who.

Richard: Had John shown you these paintings before?

Paul: No, no, I’d never seen them except in the book. But I didn’t realise he still had them. I looked through them and checked them against the ones in the book and each one was there with John’ signature written on the reverse. So I then had each and every one of the paintings framed and here they are.

Richard: And have you exhibited them anywhere, Paul? I’m sure Who fans would love to see them.

Richard: And were the original paintings used to create the set of prints which will be available on The Who Store?

Paul: Yes. I had all those paintings professionally photographed and retouched specially for these prints.

Richard: Tell me, Paul, did John go to art school or was he self-taught?

Paul: He was always drawing, sketching, and painting from a very young age but I believe he went to art school later on in the 1970s. After he bought the Tommy album in 1969, he did some paintings based on the songs off the album and had an exhibition in Silchester, close to his home. A friend of John’s asked if he could bring someone to see the paintings the following week and when he turned up it was Roger Daltrey. And from there, Roger then brought Pete Townshend down to see them too.

Richard: Was that when Pete commissioned John to do the illustrations for the book?

Paul: Yes, Pete said they were producing a book to mark ten years of The Who and he wanted John to do the paintings for it.  So John would do these pictures and then take them up to London and wait for Pete to turn up at his house. Sometimes he’d wait on the doorstep for hours!

You know, John was such a talented bloke, a very intelligent kind of guy. He loved Greek, Roman and Egyptian history which is why you see things like hieroglyphics and things like that in his paintings. And railway trains too. They crop up in many of his pictures.

Richard: Paul, it’s great to see you keeping the flame alight – the flame of the memory of John Davis and his great artworks out there and creating the opportunity for Who fans to finally see them for real. Thanks so much for all your help and telling me the background story about John and his extraordinary paintings. It was great to chat with you again.

Paul: Not a problem, Richard, any time. 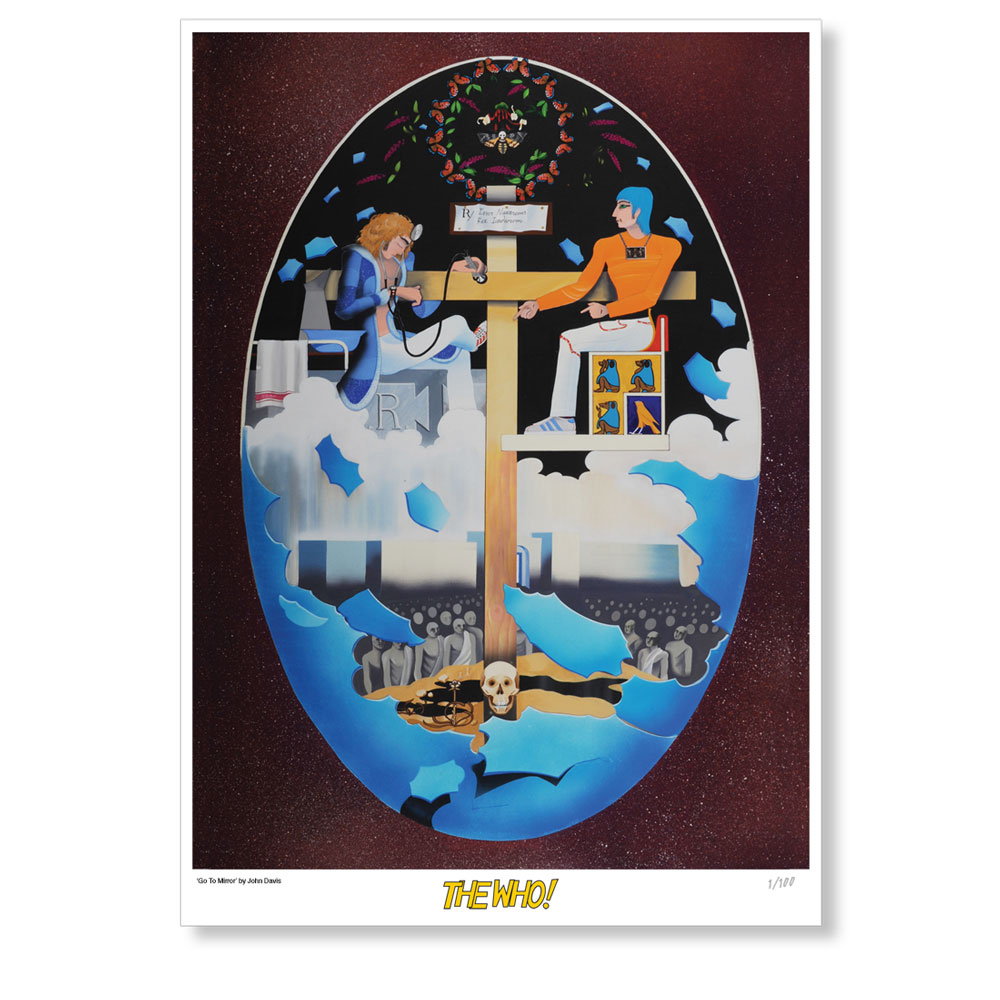 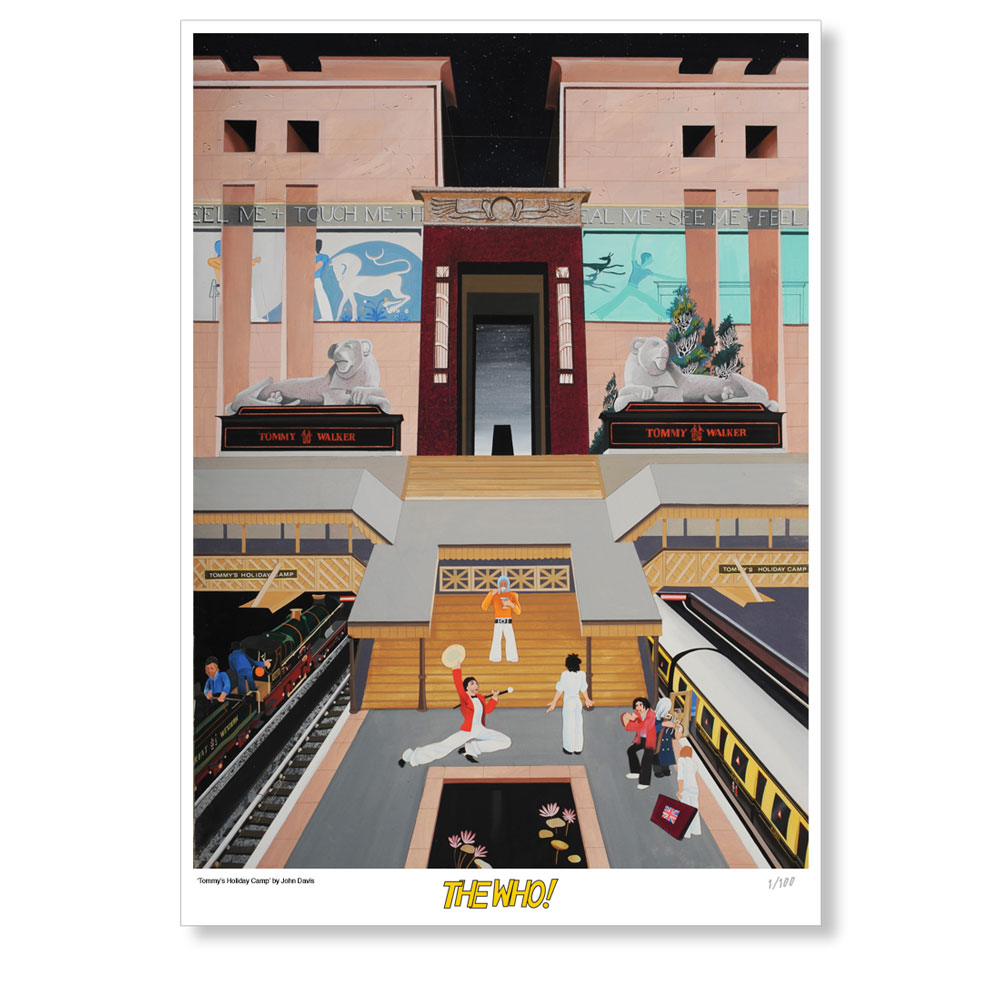 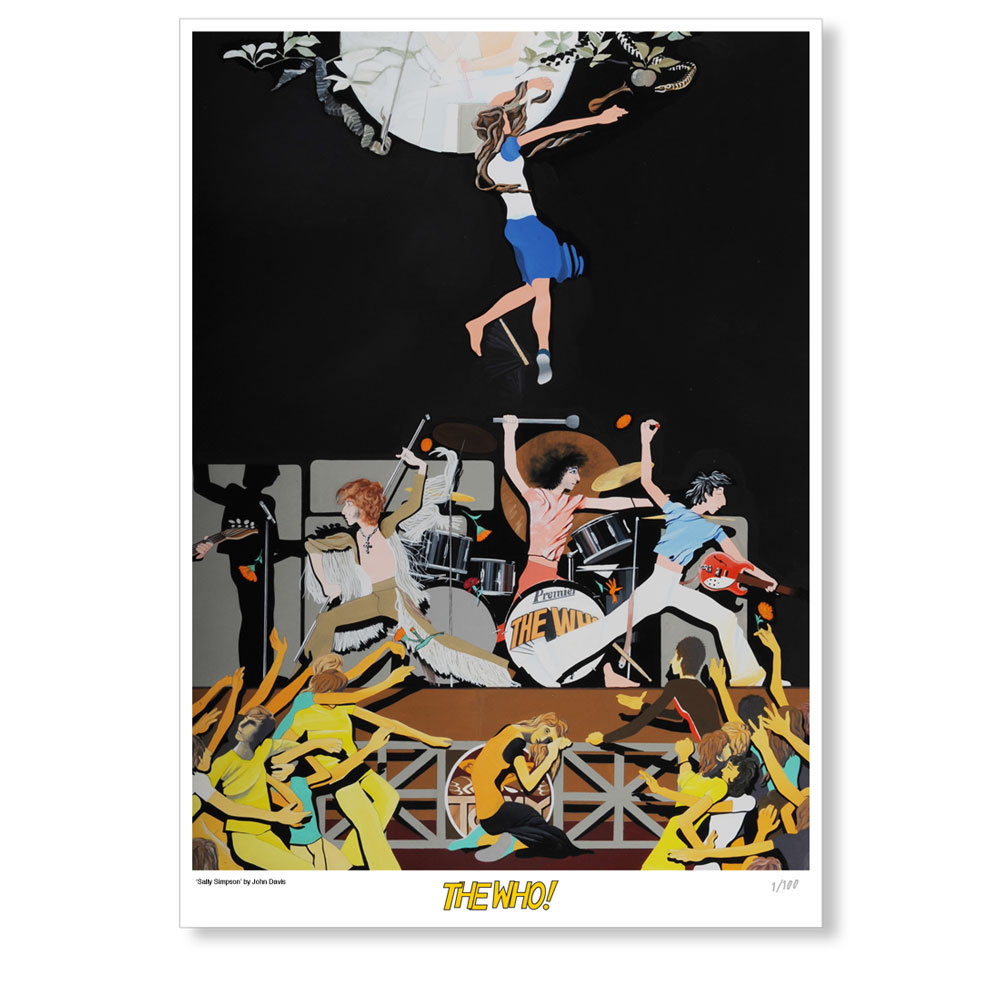 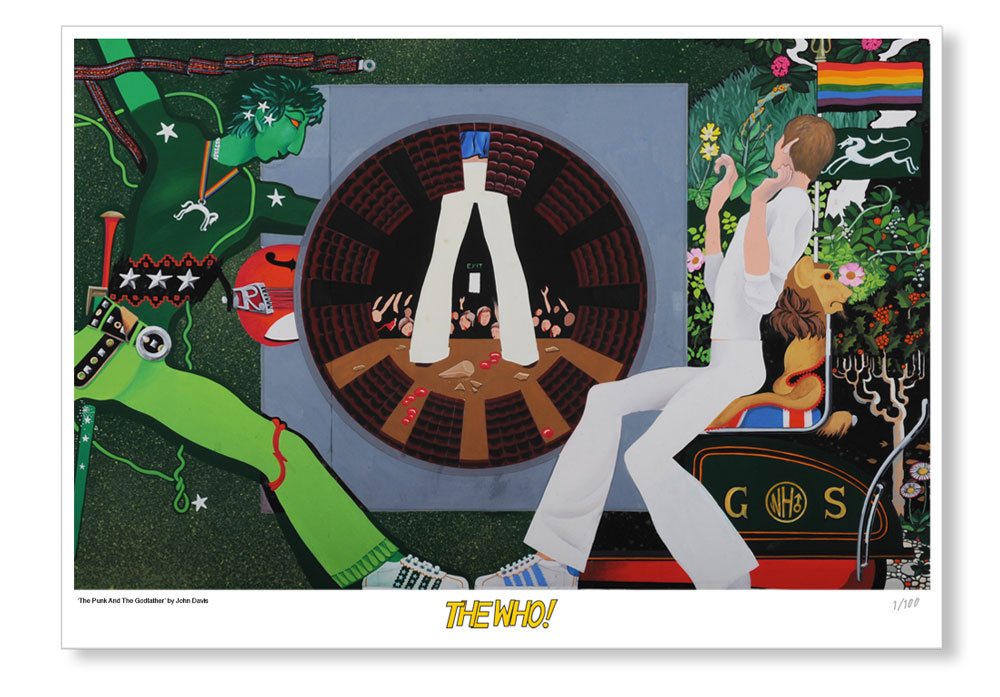 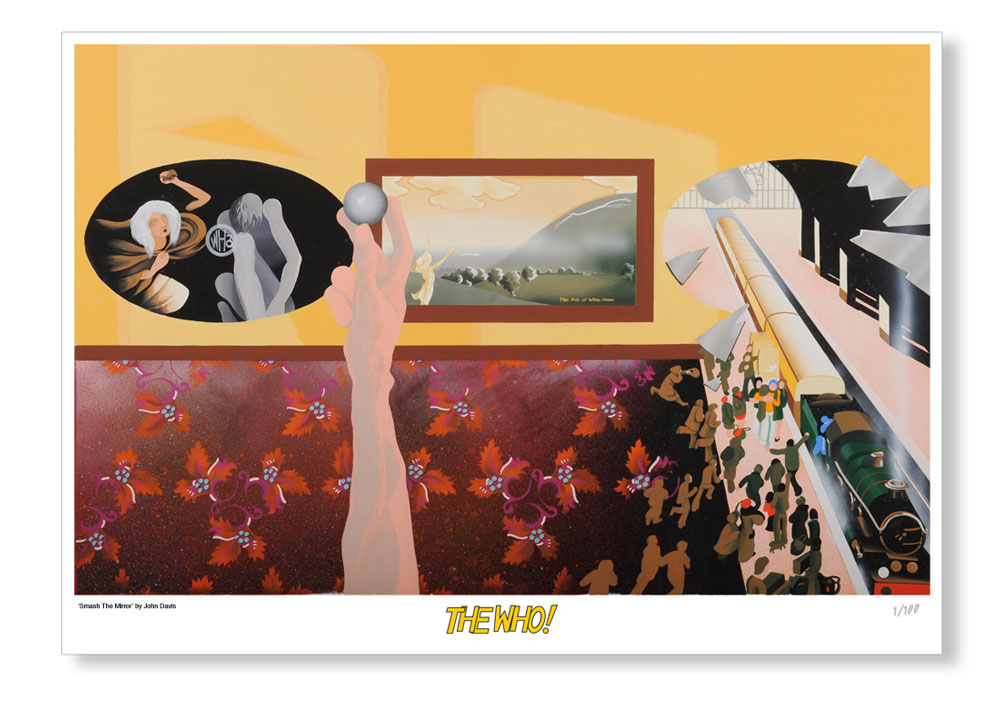 Plus a five card-set of commemorative postcards featuring John Davis artworks including ‘Substitute’, ‘Love Reign O’er Me’, ‘Water’, ‘Love Ain’t For Keeping’ and ‘The Kids Are Alright’. The perfect gift for any Wholigan!

BUY NOW FROM THE WHO STORE WHERE YOU CAN ENTER OUR COMPETITION WITH A CHANCE TO WIN A COMPLETE SET OF PRINTS!

The post The Who publish iconic fine art prints by John Davis appeared first on The Who.