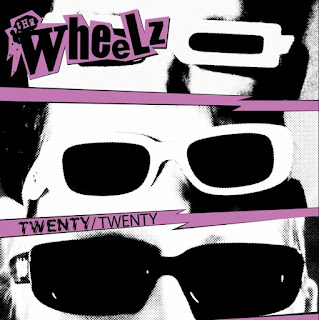 Tulsa, Oklahoma based trio The Wheelz have returned with four more tracks of absolutely perfect sing-along punk rock! In December 2018, the band released its debut album Top 10 Super Hits! – which yielded the instant classic track “Throwaway”. Out on Boulevard Trash & No Front Teeth Records, new 7″ Twenty/Twenty is a worthy follow-up to the immensely enjoyable Top 10 Super Hits! This latest release again finds The Wheelz drawing from the influences of snotty ’77 punk rock and old school anthemic street punk. Yet it’s far from a replay of the last record. I wonder if I can say this without ruining the band’s reputation, but Twenty/Twenty feels less obnoxious and far more “serious” compared to Top 10 Super Hits! Don’t get me wrong: these songs still have that same snotty edge to them. But this time through, The Wheelz are in less of a jokey mood and more, uh, pissed off! While Twenty/Twenty is not necessarily about the events of last year, it does tap into the anger and frustration of the moment. Lead track “Politicians” is that rare modern political song that’s fully nonpartisan. It rails at elected officials of all stripes who have failed the people they’ve been entrusted to serve. The equally anthemic “Washed Anyway” rages against corporate interests that systematically suck the souls out of American cities. “Generation Turncoat” calls out those who have abandoned their ideals and fallen into complacency. “Two Little Boys” is a very fine cover of the early 20th Century war anthem. All in all, Twenty/Twenty is a splendid example of what a pure punk rock record ought to be. It sounds like it could have come out on TKO Records in 1998! All of these songs are urgent and powerful, but also full of strong melodies and memorable choruses. This is a classic sound executed superbly. Vinyl copies are going fast, so get on it!
-L.R.
https://www.facebook.com/TheWheelz/
https://boulevardtrashpunk.com/shop/ols/products/the-wheelz-twenty-twenty-ep
https://www.facebook.com/boulevardtrashtulsa/
https://www.nofrontteeth.co.uk/