The Wall: A New Way To Peroxide – album review

The Wall – A New Way To Peroxide 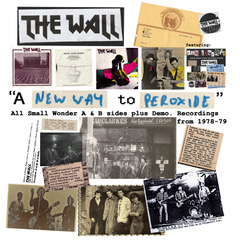 New collection featuring Sunderland punk band The Wall, combining their two singles for the Small Wonder label plus four unreleased demos from 1978-79, including the first version of Ghetto. The set was all put together by David Lowery, the brother of the band’s lead singer Ian. Ian Canty goes through it brick by brick…

Sunderland quintet The Wall initially came together in 1978, forming at the city’s School of Art And Design (part of Sunderland Poly). To begin with they consisted logically enough of four students who were enthused by the original UK punk boom. Band leader/singer Ian Lowery was joined by Andy Griffiths on bass, drummer Bruce Archibald and guitarist Joe Hammond and they quickly picked up a strong local following after some fiery live performances. Building on this, The Wall then did the same thing that a lot of hopefuls tried back then. They recorded a demo tape of their best material and sent it to one of the leading independent record labels of the time, in this case Pete Stennett’s Small Wonder.

Pete was suitably impressed with the contents of the tape and invited the band to record their first waxing for the label, the New Way EP, in early 1979. This disc was a big seller and quickly became a favourite on John Peel’s influential BBC Radio 1 show. The band responded to this success by electing to make the move to London, where of course the UK music business was/is centred. Archibald and Hammond were unwilling to relocate, so Lowery and Griffiths recruited Nick Ward and Rab Fae Beith (who was in Kirk Brandon’s band The Pack and had played drums with Patrik Fitzgerald too) on guitar and drums respectively. Second Small Wonder single Exchange/Kiss The Mirror had a production job from ex-Sex Pistol Steve Jones and also fared well in the UK independent charts.

The Wall’s increased profile led in the autumn of a packed 1979 to them signing up to Fresh/Polydor, with the latter’s golden boy Jimmy Pursey overseeing a particularly rancorous recording session. The upshot of the resentment and arguments between band members at this session was that Ian Lowery was forced out The Wall, the band he spearheaded from its inception. Lowery later founded the highly rated bands Ski Patrol, The Folk Devils and King Blank. Sadly, he passed away in 2001.

The band replaced Lowery with Irish vocalist Ivan Kelly and recorded the Personal Troubles and Public Issues album (you can read my review of the reissue of the LP here) and the single Ghetto in 1980. More line up changes occurred and the band flitted between Fresh and Polydor and then finally the No Future label, before eventually splitting up towards the middle of the 1980s.

But it is the earlier version of The Wall that we are concerned with on A New Way To Peroxide. Firstly we have the lead track of the second Small Wonder single, the punchy but accessible Exchange. The instantly memorable one word chorus and furious playing seemed to put them at the exact point where SLF and The Jam meet, without sounding overly like either band. There’s plenty of pop appeal here – in a year when The Ruts and UK Subs scored hit singles, they wouldn’t have been totally out of place in the UK charts with this record. It’s a real shame that this was the last effort to feature Lowery with The Wall, as who knows how far they could have gone without the constant personnel upheavals?

Though fast and a bit thrashy, the demo version of Another New Day that follows on from Exchange crackles with energy. The Wall were a powerful musical outfit in their early form, able to evoke a tense atmosphere that built up to the emotional release granted by the songs’ catchy refrains. Next up, it is really good to hear the Ian Lowery version of Ghetto, the third track featured here. He really invests the song with true passion and tension which helps to take it up a couple of notches.

There’s a dense mesh created between guitar and the rhythm section on the lead track of the New Way EP, something which characterised their work. As well as possessing a bright punk/pop appeal, they also nudged towards the kind of gothic end of punk somewhat. Suckers follows, benefitting from a fair dose of reggae-style rhythm and then Kiss The Mirror again shows The Wall’s slight goth edge, with a little of the early Banshees/UK Decay type of sound in their guitar attack.

Uniforms, from the first Small Wonder 7″, comically sends up the lookalike punks who spent more time trying to look the part rather than strive for any kind of change. Another demo unearthed for the first time is One Born Every Day. Like on Suckers, a little punk reggae shows its hand, but biting guitars and a fine chorus pulls it far away from the legions of Clash wannabes that were around at the back end of the 70s.

Peroxide is a more standard punk rock number, but still imbued with an imaginative lyric about the generation gap and the strain it puts on family relationships. It is the only one that wasn’t re-recorded by the post-Lowery Wall, but is still good fun. But that isn’t quite it as there is a bonus “hidden” track on the CD, a rough rehearsal recording entitled Casual Labour. This was a Wall number recorded by Ian Lowery’s next band Ski Patrol early on in their existence and gives the listener an idea of how The Wall might have continued in the post punk years had Ian remained with the band.

A New Way To Peroxide is an excellent but bittersweet set, as it is gives us a tantalising glimpse into what might have been. It’s a particularly poignant one too, as sadly Ian and Andy, the main figures through The Wall’s lifespan, are no longer with us. But this collection also represents a vital document of the first flush of a band that managed to weld fierce punk attack, interesting off-beat songs and big choruses into something quite wonderful.

Painstakingly put together by Ian Lowery’s older brother David, A New Way To Peroxide proves to be well worth the effort. It captures The Wall at their very best, full of youthful energy, but also with an unique lyrical viewpoint and chunky, addictive tunes. A very worthwhile release from a band that fell between the cracks of the first flush of punk, post punk and the 1980s wave, The Wall in their early form depicted here realised their potential in glorious fashion.

The Bandcamp link for this release is here

The post The Wall: A New Way To Peroxide – album review appeared first on Louder Than War.