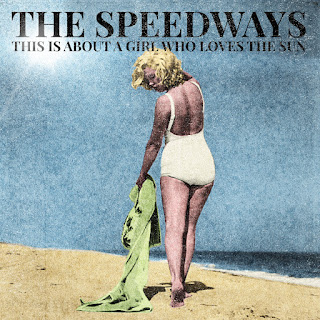 Today’s post falls under the category of “for super fans only”. The latest single from The Speedways consists of two songs that were released months ago plus a live track. If you’ve never heard The Speedways before, your best starting point is the band’s latest LP Radio Sounds – in my opinion, the best power pop album of the last several years. But if you’re already a massive Speedways fan as I am, “This Is About A Girl Who Loves The Sun” will be an essential addition to your record collection. Why? Well, because vinyl records are freaking cool! This one is a limited edition release from Snap! Records/Hurrah Musica on yellow sun-colored vinyl!

I like that the band chose “This Is About A Girl Who Loves The Sun” as the third single from Radio Sounds. It’s not an obvious choice for a single. It’s more of a “deep cut” – the kind of grand, dramatic song that The Speedways always place at the end of an album side. This one is really heartbreaking. Poor Marilyn brought so much happiness to others yet experienced so little of her own. “The Day I Call You Mine” is also from Radio Sounds and probably my favorite song on the album. This just as easily could have been the A-side, but I love that they flipped it. The track exclusive to this release is a live version of “Just Another Regular Summer”, the song that ended Side 1 of the album of the same name. This, of course, is the first recorded version of this song to feature the full band lineup of The Speedways. It was recorded at The Windmill Pub in Brixton this past September. The band has released that entire live performance as a digital EP titled Sunday Will Never Be The Same. Each purchase of the new 7″ comes with a free download of the live EP. So if you’re a Speedways super fan, that’s a sweet deal. And if you’re not a Speedways super fan, there’s no way you’ve read so far. God, I love this band!
-L.R.
https://thespeedways.bandcamp.com/album/this-is-about-a-girl-who-loves-the-sun-the-day-i-call-you-mine-single
https://snaprecordsspain.bandcamp.com/album/this-is-about-a-girl-who-loves-the-sun-ep-fun-7041
https://www.facebook.com/JustAnotherRegularSummer/
https://www.facebook.com/SnapRecordSpain/