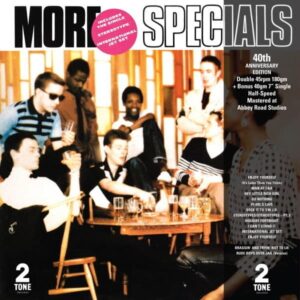 The Specials revival rolls on since the release of Encore and the Two Tone re-issues to celebrate 40 years are a welcome trip back in time to the dark Thatcher years, that Dammers and co painted in black and white imagery for the youth, Wayne AF Carey reviews the new master edition…

After releasing the excellent Two Tone box set earlier this year (review) it was a given that Dammers was going to reissue more from the groundbreaking collection of ska classics. This album has been done before, every fan will no doubt own it, yet to have it on double vinyl and half speed mastered, with the added bonus of the rare as fuck 7in, it’s essential for the old school ska heads who are devoted to this movement as much as ever. I listened again and again to this in my youth and it still makes me smile now as I crank up the vinyl and bask in the light and dark sound of Coventry’s finest.

Enjoy Yourself lulls you into a false sense of security with it’s party time happy ska mood. Although a cover of the Guy Lombardo tune it’s owned by the spirit of Dammers right throughout. Then it all kicks in with the darkness of Man at C&A a dark rolling ska tune with Neville Staple issuing a warning of a nuclear attack (remember those adverts 80’s kiddies?) Terry Hall’s moody dulcet tones take over and it’s pure smoothness mixed with Rico’s trombones.

Hey, Little Rich Girl still sends shivers up my spine to this day. A sad story that tugs at the heartstrings and bounces around with it’s skanking ska beat. Hall and Staples feed off each other here and the party just rolls on. Do Nothing is just a stone cold masterclass of ska, a proper head nodder that takes me right back to the early eighties of my youth. I don’t need to explain, you’ve all heard this unless you’re deaf. The trumpet solo from Rico sounds crystal clear on this re-master which has polished up the grit of the first release.

Pearls Cafe is slow roller that sounds as magic as the first time around. A sad story of an aged woman who’s lost the plot and the looks of her youth. Rhoda Dakar from The Bodysnatchers joins Terry here to duet on this sad lament with the classic line “It’s all a load of bollocks.” Quality tune and a testimony to how good The Specials were at making a sad song sound so fucking jolly! We now get album filler number one Sock It To ‘Em J.B. It’s funky as fuck but a quite pointless tune that quotes Jimmy Bond’s films. Why? The Selecter did something similar and that was shit n all.

Stereotype / Sterotype, Pt. 2 is and still sounds fuckin top. A dark number that tells the tale of a proper pisshead who drink drives (don’t drink and drive) and wraps himself around a lamp post. Chilling stuff that sounds haunting and then warps into a slow burning reggae toasting from Neville Staple who gives the message about drink and drugs. The lines “I don’t want no whiskey to make me frisky” “I don’t need no speed to make me go fast” He just wants his stereo! Excellent. Filler number two Holiday Fortnight is a calypso festival tune that sounds alright but not needed really. It’s like a bit of a lightener to kill the dark mood that Stereotype leaves on your brain. Harmless fun at the end of the day.

I Can’t Stand It welcomes Rhoda Dakar back on duet duties. Another calypso tinged number here that rolls on with Dammers fucking about on his organ piano. A proper not so love song that just works with the ending line of “Goodnight Terry. Goodnight Rhoda” The blueprint of Ghost Town is revealed on the immense International Jet Set. Haunting stuff from Hall here with Dammers’ spooky organs floating around in the background. A mention to Horace Panter here must go down for the simple yet effective bass line that sounds stunning. All ending with a plane crash which makes it all the more stark with the screaming passengers…

Enjoy Yourself (Reprise) just makes me chuckle the way it’s all slowed down, with Staple and Hall sounding stoned and The Go Go’s joining in for daft effect. The 7in single is worth a mention just for the fact that the original was rare at the time of the initial release. It’s basically Roddy Radiation and Neville Staple fucking around with rock n roll standards and basically having a laugh. Nice to have a Two Tone 7in back in me collection! Overall this is an album that newcomers to The Specials will enjoy. A seminal part in my life that hit me in the face as a lanky skinny 10 year old growing up in dark times, yet they spread some light for the youth who missed out on the excitement of punk a few years earlier. The fact it sounds still fresh today and resonates with 2020 is a reminder of the cycle of life. Fuck the government…