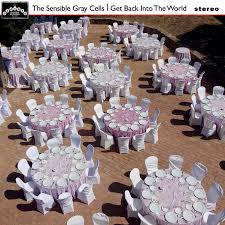 The Sensible Gray Cells – Get Back Into The World

With the announcement of the much talked-about original line-up Damned reunion tour, you could be forgiven for thinking that Paul Gray and Captain had quite enough to focus on. And yet, clearly not ones for the quiet life, they have rebooted the cleverly named Sensible Gray Cells, the garage outfit they formed with Marty Love (of Johnny Moped’s band) back in 203. For those unfamiliar, Sensible Gray Cells have everything you’d expect from the line-up – the blend of full-on punk attitude and verve with a sense of infectious fun – but in a way that incorporates their sixties garage and fifties rock’n’roll influences in a very apparent way.

It’s a record that grabs you from the instant the starting pistol is fired – opener Sell Her Spark brims with garage-pop attention grabbing melody, setting the scene for an ever-shifting sound throughout, Similarly vibrant moments mix with slower, more reflective tracks, all in a truly authentic fashion. The thoughtfully reserved production and doses of Hammond organ add to the retro feel throughout, but this is more than a record which relies solely on the past, dealing with modern issues in its lyricism. Stupid Dictators, for example, twins borderline breezy New Wave with a self-explanatory theme of megolamaniac  world leaders (“play acting like they’re running things/While cosseted, and live like kings”)  and Get Back Into The Word, pairs a similar feel with a dark kitchen sink reflection on the turmoil of technology-ruled modern life (“Check in with Amazon telling me what I need…)

Forsaking vague metaphors in favour of unflinching commentary, the highlight of the albums lyrical wryness, What’s The Point of Andrew? manages to sum up Prince Andrew and his recent controversies in under two minutes. Its a timely record on the whole – something I hoped to find out more about when I threw a few questions Captain Sensible’s way…

So, its been an “eventful” year, what made it seem the right time for a Sensible Gray Cells album?

When The Damned toured with Johnny Moped a year or so ago, Paul and myself were really impressed with Martins drumming with really drove the band. And it was him that resurrected the SGC project…having been a fan of Postcard…so after nagging us to make a follow up he had to put his money where his mouth was and occupy the drum seat.

But with a half written bunch of song ideas coming slowly together in the studio (and the pub across the road) our budget soon got used up…but then all the weirdness started with lockdowns and stuff, so a home recording strategy became necessary.

With no gigs anymore everyone who can play a couple of chords is probably making their lockdown albums…a whole load of interesting music will be pretty much the only good thing to come out of this. Anyway, with all that free time on our hands we messed around with the songs, extending bits…adding instrumental sections…it became a bit epic and moody in places too.

I’m prone to laziness…and starting projects that never get finished. That’s never going to happen with Martin and Paul on my case. As with Postcard a lot of the album was recorded on Paul’s kitchen table where a lot of the farfisa and vocals were done.

Prior to that, what was the original intention behind forming the band initially? Additional projects always seem like great outlets for musicians.

Well, I shouldn’t really say this but some of these songs were offered to, and rejected by, “the other lot”…which doesn’t make them inferior quality…just maybe (I’m guessing here) a trifle too melodic.

So I usually have a selection of song ideas in various stages of completion sitting on the shelf so to speak. And seeing PG and myself dig similar music it made sense to work together…and he’s a much better bassist than me anyway. In fact I was only maybe The Damned’s fourth or fifth best to be honest.

Paul is writing some stupendous tunes currently, naggingly catchy…your head hits the pillow after a day in the studio with all those riffs and melodies going round and round.

There’s no shortage of inspiration for lyrics with these mad times were going through, its given the album a concept vibe, accentuated by the incredible front cover, taken by a mate who saw that scen laid out of him last year when on a Meditteranean holiday. He said it all looked like a Hipgnosis album cover and took the snap we ended up using…one that was strangely prophetic.

It’d sure be nice to “get back into the world” at some point too…but let’s have the old normal back please. Not this dystopian nonsense they’re trying to get us used to. And live music…I’ll bet Boris, Gove and nerds like Whitty and Fauci have never been to a gig in their life…well we all want that back you creeps. Not sitting at home watching mind numbingly crap TV boxsets ad infitum.

The album has a real “lost classic” feel already. Was it a conscious decision to mix really contemporary lyricism with that classic garage/rock’n’roll sound, or something that happened organically?

Dr & The Medics Clive was DJ at SoHo’s Alice in Wonderland club, which The Damned would frequent back in the eighties…he turned us onto some great garage sounds, influencing the direction our next album (Strawberries) would go. This is still the music we listen to so its going to be right there in what we do I guess. Fuzz, Wah, squeaky farfisa, handclaps, wo wo wos…dolly birds cavorting about in mini skirts …we missed out on the groovy 60’s love by a few years but that doesn’t mean we can’t have a damn good time recreating the music.

“Get Back Into The World” is out November 27th on Damaged Goods. Special thanks to Division PR.

All words by Amy Britton – find more on her archive