The Rocks from Huntsville on Gold Master and Woodrich 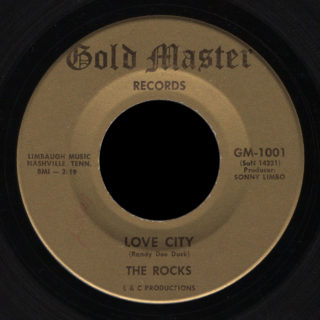 The Rocks came from Huntsville, in northern Alabama.

Randy Duck is quoted on a Lee High School alumni site (a couple spellings of names are corrected):

We had several different drummers after Donnie, but Doug Cheffer was the last one. Donnie and Doug are both passed away.

My copy of “Terri” is signed by Butch Rolfe.

I’ve seen a later photo of the band with this lineup: 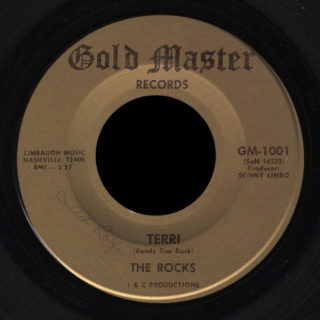 Their second single came in 1965, “Love or Money” by Don Cortelli and Randy Duck with “Rock Pretty Baby”, on Gold Master GM-1003. I haven’t heard this one yet.

The Rocks get a slower, bluesy sound on the top side of their last single “Because We’re Young” written by Walter Sims, I’m not sure his connection to the band. The flip is a ballad, “My Only Love” by Johnny Harbin and Randy Duck, released in November 1965 on Woodrich Records WR-1249.

A single by the Rocks on White Cliffs 239, “Who Do You Love” (by Edgar Starns) / “Keep My Woman Home” may be a different group.

Besides the two Rocks 45s, Sonny also produced the Hi-Boys Combo ‎”Why (Must I Love You)” / “Some Man (Other than Me)” both written by C. Bolden, released on Gold Master GM-1004.

Gold Master GM-1002 is Hollis Champion’s “Stand There” / “Sugarfoot Rag”, and doesn’t have Sonny’s name or publishing anywhere on the labels.

Sonny Limbo produced the In and the Bobbies, which I’ve covered before. He used Sonic Recording Service in Memphis for those records, I’m not sure where the Rocks recorded.

Sonny also produced at least two singles on the Exclusive Records label out of Chattanooga: