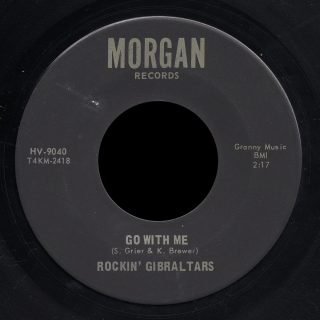 The Rockin’ Gibralters came out of Montgomery, Alabama, making four singles between 1966 and 1968.

I haven’t been able to find details about their history yet. 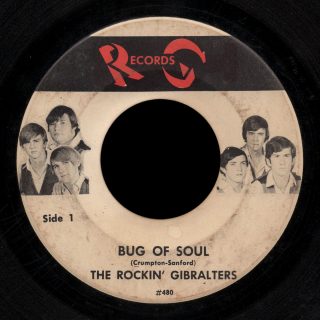 I’m not sure which was their first single but it may have been “Go With Me” / “Signed, Sealed and Delivered” on Morgan HV-9040 from 1966. Sonny Grier and Keith Brewer wrote “Go With Me”, with publishing by Granny Music.

This is their most “garage” single, with harmonica but no trumpet, and some great screams from Sonny Grier on “Signed, Sealed and Delivered”.

The Rockin’ Gibralters next single was probably “It Will Stand” / “I Can’t Help Myself (For Loving You)” on Empire 447. The B-side is another original by Brewer and Grier, which I haven’t heard yet.

The Gibralters released their next two singles on their own RG Records label, fashioning a fine soul sound on each. The different label designs and numbering suggest different studios or pressing plants. 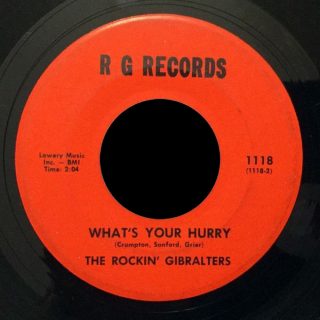 “Bug of Soul” is an original by Rusty Crumpton and Ed Sanford, on RG Records 480. The trumpet plays an important part in the sound of the band by this time. I’m not sure if “It Will Stand” is the same version as the Empire single or a new take. Release date was about November 1966.

“What’s Your Hurry” is their most produced single, with what sounds like vibraphone as well as piano. Crumpton, Sanford, and Grier wrote that side, while Crumpton, Sanford and Brewer wrote “The Bare Essential”, the ostensible A-side, though I haven’t yet heard it. Lowery Music Inc. published both songs. Release was December, 1968.

In 1968, Ed Sanford, Keith Brewer and Bobby DuPree would form a group called Heart, with Johnny Townsend and Tippy Armstrong of Tuscaloosa’s Magnificent Seven / Rubber Band. Heart would play the Whisky a Go-Go in Los Angeles and cut one single on Reprise Records 0772, “The Train” (J. Townsend) / “Heartbeat” (Brewer-Sanford-Townsend-Dupree-Crumpton), both Hollytex Music Co. and produced by Bob Hinkle.

I’m not sure what Sonny Grier, Rusty Crumpton or Ronnie Monroe did after the breakup of the Rockin’ Gibralters.

The photo at top came from the very interesting Tuscaloosa Beach Music site which is now unfortunately defunct but available, in part, on the Internet Archive.

The Hey Baby Days site has a few more photos of the Rockin’ Gibralters, including on stage at the City Auditorium.