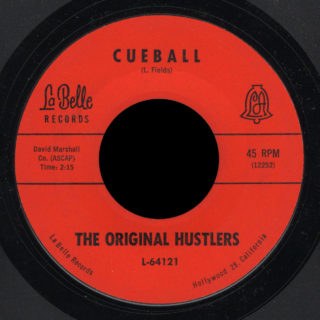 The Hustlers included Chauncey Romero, Doug Grantz, and John Tavaliogne, plus two members I do not have first names for, Roach and Bedwell.

The Hustlers first cut “Hangin’ Five” and “Barefoot Adventure” on the House of Note Records label, as early as December, 1962. I haven’t heard either song yet. They were cut at Paul Buff’s PAL studio, and an alternate version of “Hangin’ Five” exists on tape.

Sometime in 1964 they made their next single, changing to the Original Hustlers, probably to differentiate the group from the Hustlers with Grant Baker who recorded two excellent R&B/exotica instrumental singles on Downey, “Inertia” / “Eight Ball” and “Kopout” / “Migraine”.

“Cueball” was written by L. Fields, with publishing by David Marshall Co., I’m not sure what the original source was for this song, but it’s a fine surf instrumental. 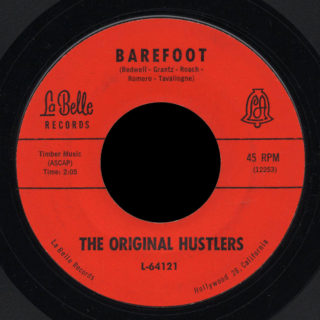 “Barefoot” is an original by the Hustlers, released on LaBelle L-64121.

LaBelle mainly released records by the folk group the Countrymen, but it also issued the Swords “Raunchy” / “Fibreglass”, which I haven’t heard yet (and could use label scans of).

The Tornadoes included Norman (Roly) Sanders, Gerald Sanders, Leonard Delaney, Jesse Sanders, and George White, and would cut “Bustin’ Surfboards” among other singles on Aertaun and an album on Josie.

The Templars included Garry Brier, Glen Hellman, Dave Gruver, Ron Norcross and Mike McGrath, but I do not believe they recorded (they’re not the Templars who cut Chafungie” / “Get Out of My Life” on Paragon).

I don’t have any info on Never So Few.

The Tyrods “She Said, He Said” on Mark Records

The Templars “Chafungie” on Paragon