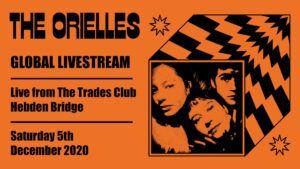 The Orielles are playing a special social isolated gig at Hebden Bridge Trades Club that will be livestreamed globally.

Hailing from nearby Halifax the band got their first big break as teenagers just down the road in Hebden Bridge when club promoter Mal Campbell gave them some support slots. At the time they were a three piece of drummer Sidonie ‘Sid’ Hand-Halford, her sister Esme Dee on bass/vocals and Henry Carlyle Wade on guitar/vocals.

Their potential was obvious from those very early days as they built a local following before coming to the attention of Heavenly Records boss Jeff Barrett, who hosts an annual label weekender at the club featuring many of his acts. He snapped them up and their debut album, Silver Dollar Moment, was released in February 2018. AllMusic described the album as a “stunning debut… it does have a uniquely sweet spirit and lighthearted beauty all its own by a young U.K. trio that gives the baggy indie dance sound of the early ’90s a serious upgrade.” The follow up, Disco Volador, was released in February this year produced by Marta Sologni.

“Its literal interpretation from Spanish means flying disc but everyone experiences things differently. Disco Volador could be a frisbee, a UFO, an alien nightclub or how you feel when you fly; what happens to your body physically or that euphoric buzz from a great party,” suggests bassist and singer, Esme. “But it is an album of escape; if I went to space, I might not come back.”

It won a Metacritic rating of 73, with critics commenting that the album mixes “the euphoria of whooshing through infinite space past astral displays of imagined beauty via a blend of disco funk, dream pop, electronic exotica and ’70s highlife.”

This one time concert on Saturday 5th December 2020 at 8pm will not be rebroadcast, but features full production beamed direct from their favourite venue.

The Orielles will have brand new, super limited edition, merch for sale that will only be available when buying tickets and during the stream so don’t miss out.

The post The Orielles to play global livestreamed gig at Hebden Bridge Trades Club appeared first on Louder Than War.