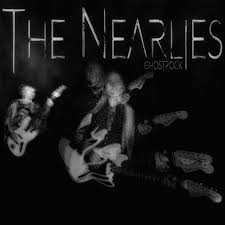 The Nearlies have just released their album Ghostrock. It’s the soundtrack to the Lynch/Tarantino film yet to be made.

The France-based trio have a classic, guitar, bass and drums set up which makes this recording instantly familiar, kicking in immediately with Granny B with its classic ZZ Top licks underpinned by it’s solid rock drumming. The band are truly international. Formed by Jarmo (from Finland) and Derico (from Brazil) in 2008, initially an instrumental band. They tried a few singers before realising that French bass player Hanna was actually the best person for the job.

The band’s experience is on show as they all get to showcase their musical chops, taking you on a journey through a number of styles, including jazz, garage, blues and bossanova. It hits its atmospheric peak midway with Tango Fiction, sounding as if Hanna has soaked her vocal chords overnight in Jack Daniels, transporting you to a smoky Parisian Cafe. (That’s providing they don’t have a smoking ban in France?)

My favourite track thought is Pinjata. A fun, jaunty instrumental clocking in under 2 minutes. This could have been lifted directly out of  Twin Peaks, with a backwards talking midget jiving to the classic surf / Shadows guitar sound.

Ghostrock has just 8 tracks over its 30 minutes. The Nearlies debut album doesn’t mess around, nor outstay its welcome.

“All words by Iain Key, see his Author Profile here author’s archive or find him on Twitter @iainkey.”

The post The Nearlies: Ghostrock – album review appeared first on Louder Than War.