The Motovators formed in the spring of 1964 in Haltom City, just northeast of Fort Worth, Texas. The original lineup was:

Terry Lee Hungerford (b. June 28, 1947) and Roger Young played in all iterations of the group.

At least six other musicians would be in the group before their breakup in August of 1965:

The Motovators recorded two songs in March, 1965, but only two demo acetates were made and the record was never released.

Terry Lee Hungerford’s mother Blanche kept an excellent scrapbook of photos and clippings. She also kept a detailed log of the Motovators’ live shows, beginning with a steak house in Whitewright, TX, and notable events in the history of the band. Thanks to her work, and the help of Wm. Lewis Wms., I can present this detailed history of the Motovators and the Fort Worth scene in 1964-66.

In June of 1964, Jimmy Nobles moved out of state and was replaced by Jimmy Moore. That summer Mike Langston joined on vocals and maracas.

Motovators lineup at this time was:

March 8, 1965 – Panther Hall audition with KCUL DJ Ron McCoy and hall owner Bill Kuykendall. Other bands at the audition were the Chantones and the Images

March 13, 1965 – Jolly Time Skating Rink with the Kasuals. The Motovators play “She’s Gone”. Phil Reece announces on Monday that he’s joining Bobby Crown’s band. However, it seems that Phil would rejoin the Motovators for in late April.

March 26, 1965 – Motovators turn down Panther-a-Go-Go show with the Images and Jerry Lee Lewis.

April 2, 1965 – National Hall Battle-of-the-Bands with the Capris, the United Sounds, and Charlie Christy & the Crystals. Emcees Bob Allen and Bill Warren of KXOL. The Crystals won the battle for 30% of the door.

April 5, 1965 – The Teragon Club audition with the Coachmen, but lost the job to Jerry Williams & the Epics

April 10, 1965 – Terry & Roger made two trips to Dallas to see Marvin Montgomery about releasing their record, but he was out both times.

May 1, 1965 – audition at the Pit in Dallas was cancelled, but the group auditions for Louann’s Club. $80 a night if booked.

May 13-15, 1965 – booked to play Jacque’s Lounge in Roswell, New Mexico for $125 per night, but cancelled when the owner found out the group was underage.

May 15, 1965 – Jolly Time Skating Rink with the Coachmen (“one of the Coachmen played as 5th member of Motovators”)

June 4, 1965 – Motovators and the Elites booked by Ray Beard for Shindig! autograph party at Round-Up Inn behind Will Roger’s Coliseum, with DJ Mark Stevens.

June 5, 1965 – appointment for audition at Studio Club in Dallas 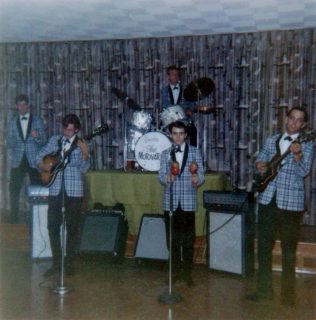 June 26, 1965 – Jolly Time Skating Rink -after the show Terry, Roger and Donnie left to Villa Acuna, Mexico at 4:15 AM, returned later than they expected on Monday causing Donnie to lose his job. This Monday was also Terry’s 18th birthday.

July 5, 1965 – Mike Langston leaves the group, which will continue as a four-piece: Terry, Roger, Phil and Jimmy

July 10, 1965 – Holiday a-Go-Go with the Blue Notes and DJ Mark Stevens. The Blue Notes ask Terry to join them for a three-day tour, but turns it down because of the Motovators bookings

Terry turns down offer to join the Greenmen to finish education.

July 25, 1965 – Panther-a-Go-Go “Battle-of-the-Rock N Roll Bands” with Larry & the Blue Notes, the Jades, the Images, the Kasuals, the Visions, the Naturals, the Barons, Chas Christy & the Crystals, Jack & the Rippers and the Coachmen. Emcee was Bill Warren of WXOL, show host was Mr. Fred Slater.

Prizes were a trip to the West Coast, 1 year of guaranteed bookings, and opening slot with the Righteous Brothers at Will Rogers Coliseum.

August 19, 1965 – Phil Reece and Jimmy join Gary Payne and the Playmates, and the Motovators split up.

Terry Lee Hungerford would join Jerry Williams & the Epics in 1966. Starting in the 1970s he would be part of several bands including Ripe Chops, the Freedom Band, the Other Brothers Band, No Respect, Road Crew, and the Terry Hungerford Blues Band. He worked for Pacific Bell and even opened his own BBQ restaurant, Hungerford’s Finest in Watsonville.

All the posts based on Terry Hungerford’s scrapbook can be viewed at this tag link.

Special thank you to Andellyn Purvis-Hungerford for sharing this material.