Bill and Corky Kuykendall built Panther Hall in 1961 as a bowling alley, located at 600 Collard St on the east side of Fort Worth. When bowling didn’t succeed, the owners reopened on July 4, 1963 as a live music venue.

By 1965, KTVT, channel 11, was broadcasting an hour of the Cowtown Jamboree live on Saturday evenings. Friday nights were “Panther A-Go-Go” from 7 PM to midnight, and taped portions were shown on KTVT on Sunday evenings.

The Motovators appeared at Panther A-Go-Go at least five times in 1965. They auditioned twice, on March 1 and March 8, 1965 the second time with KCUL DJ Ron McCoy and hall owner Bill Kuykendall. Other bands at the audition on the 8th were the Chantones and the Images.

Two days later they rehearsed at the hall, and on March 12 they played with the Images and the Sounds Unlimited, plus Ron McCoy as host, and Kay Harris leading the go-go-dancers. The Motovators on top stage with the Images and the Sounds Unlimited on the sides. Robin Hood Brians & His Merry Men were the main attraction. A detailed set of instructions refers to Gary Carter instead of Robin Hood, I’m not sure why.

The Sounds Unlimited were a Dallas group: Paul Jarvis, Ron Davis, Steve Webb, Phil Ferrell and Chuck Hodges. In 1966 they would make their only single, “Keep Your Hands Off of It” / “About You” on Solar Records.

On March 26 the Motovators turned down a Panther A-Go-Go show with the Images and Jerry Lee Lewis.

They appeared on the May 21 Panther A-Go-Go with Lady Wilde & the Warlocks, the Velvateens from Lubbock/Texas Tech, Cecil Lang McCullough, and the Warlocks, plus “Panther-a-Go-Go drummer” Al Breaux.

The Velveteens played one side of their single, “Ching Bam Bah”, which had been released in February.

Lady Wilde is the same singer who cut two 1965 singles, “Poor Kid” / “Another Year” on ARA and “Noise Of Sound” / “Poor Kid” on Chicory, both produced by Royce McAfee. Her real name was Marie Smith.

The Warlocks were the Dallas band that included Dusty Hill, Rocky Hill, Philip Vickery and Kean McClelland. In 1966 they cut the great singles “Life’s a Misery” / “Splash Day” on Paradise and “If You Really Want Me to Stay” / “Good Time Trippin’” on ARA. At some point after the singles, the Warlocks added Frank Beard on drums and became the American Blues. Little Richard Harris was also a drummer for the Warlocks at some point, according to Dale Smith of the Allusions in an interview with Mike Dugo.

After playing Panther Hall, the Motovators went to Louann’s Club in Dallas to play for an additional two hours! 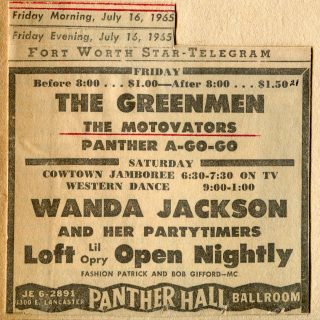 After the show the Greenmen asked Terry to join them, but after some discussion with his family, he declines to finish his education.

Sunday, July 25, Panther A-Go-Go held a huge “Battle-of-the-Rock n Roll Bands” with eleven bands: Larry & the Blue Notes, the Jades, the Images, the Kasuals, the Visions, the Naturals, the Barons, Chas Christy & the Crystals, Jack & the Rippers and the Coachmen. Emcee was Bill Warren of WXOL, show host was Mr. Fred Slater. The family scrapbook preserves set lists and scores for the bands.

Prizes were a trip to the West Coast, one year of guaranteed bookings, and opening slot with the Righteous Brothers at Will Rogers Coliseum.

On August 1, Panther-A-Go-Go was rerun on TV with the Motovators doing “Walkin’ the Dog”.

All posts from the Motovators scrapbook can be seen at this link.

Thank you to Wm. Lewis Wms. and Andellyn Purvis-Hungerford for sharing this material. 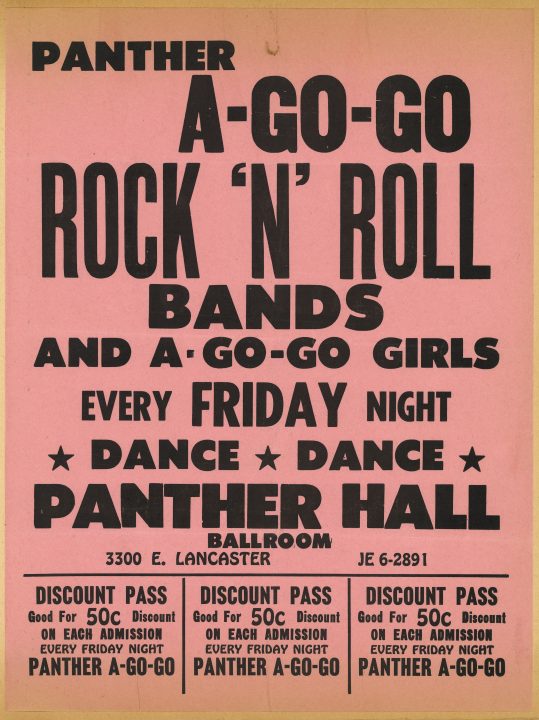