Welcome to another posting of a series of gig listings for 1960s bands. None of these lists is exhaustive and my idea is to add to them in the comments section below over time. They are here for future researchers to draw on.  I have also added a few interesting bits of information and will add images in time.

I’d like to encourage band members to get in touch to share memories, or for anyone to send corrections/clarifications to my email: Warchive@aol.com

Equally important, if you attended any of the gigs below or played in the support band, please do leave your memories below in the comments section for future historians to use. If you know of any missing gigs, please add them too, if possible, with the sources.

Formed as The Nomads in early 1962 by lead guitarist Roy Woods and bass player Keith Karlson, the group briefly included future Easybeats drummer Snowy Fleet before he emigrated to Australia; his place taken by Jon Conrad.

The Nomads were subsequently joined by singer/pianist Stu James and rhythm guitarist Adrian Wilkinson (who moved to lead when Woods departed) that September.

Terry O’Toole joined on piano (with James focusing on singing) in August 1963 and the band became The Mojos.

14 March 1964 – California Ballroom, Dunstable, Bedfordshire with Johnny Washington & The Congressmen and Sonny with The Stylos

16 April 1964 – Colchester Odeon, Colchester, Essex with The Kinks, The Dave Clark 5, The Hollies, The Treble Tones and Mark Wynter

2 May 1964 – Astoria, Finsbury Park, north London with The Dave Clark Five, The Hollies, Mark Wynter, The Kinks and Trebletones

3 May 1964 – Odeon, Lewisham, southeast London with The Dave Clark Five, The Hollies, Mark Wynter, The Kinks and Trebletones

10 May 1964 – Granada, Walthamstow, north London with The Dave Clark Five, The Hollies, Mark Wynter, The Kinks and Trebletones

29 August 1964 – Gaiety Ballroom, Ramsey, Cambridgeshire with The Phantoms and Banger & The Hermits

3 October 1964 – Royal Edmonton, Edmonton, Middlesex with The Rolling Stones, Mike Berry & The Innocents, Simon Scott and The Leroys and Inez and Charlie Foxx

Around this time, Conrad, Karlson and O’Toole departed to form The Epics.

James and Crouch continued with The Mojos name bringing in drummer Aynsley Dunbar and bass player Lewis Collins. The quartet recorded two singles for Decca as Stu James & The Mojos: “Comin’ On To Cry” and “Wait a Minute”. 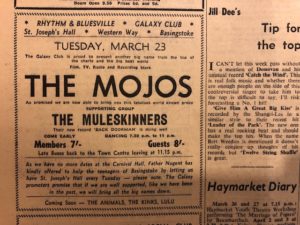 3 July 1965 – Clacton Town Hall, Clacton, Essex with The Birds and The Blue Jades 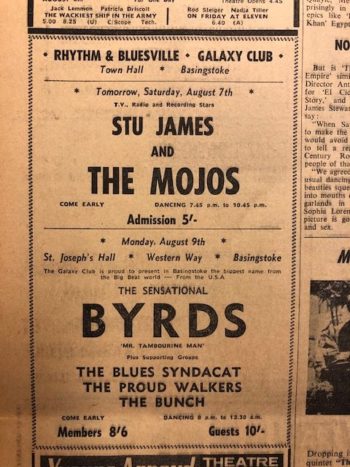 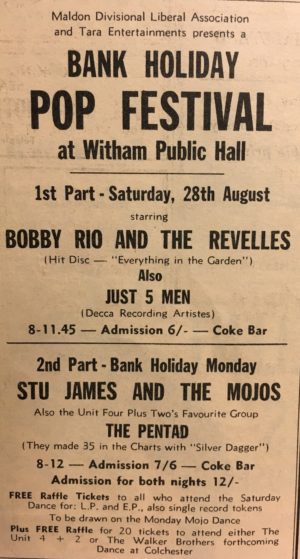 21 May 1966 – Town Hall, Louth, Lincolnshire with The Moonspinners

Record Mirror’s 24 September issue noted that Aynsley Dunbar had left. He joined John Mayall’s Bluesbreakers before the month was out.

Crouch and James replaced them with drummer Stan Bennett and bass player Deke Vernon from Birmingham. 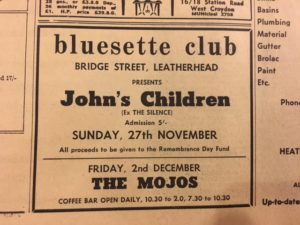 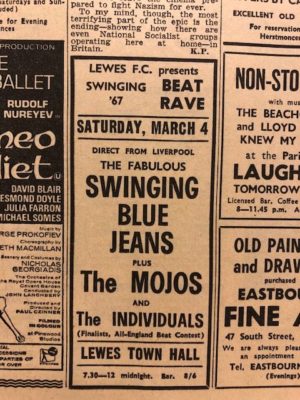 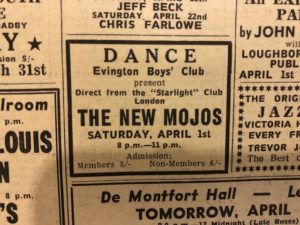 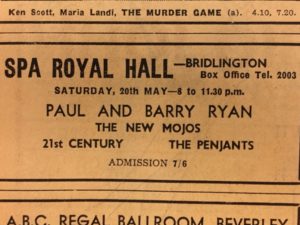 20 May 1967 – Spa Royal Hall, Bridlington, East Riding of Yorkshire with Paul & Barry Ryan, 21st Century and The Penjants (billed as The New Mojos)

It may have been around this time that the band spent a few months working at a luxury hotel in the Ivory Coast. 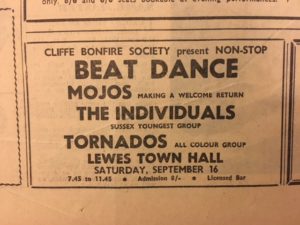 16 September 1967 – Lewes Town Hall, Lewes, West Sussex with The Individuals and The Tornados 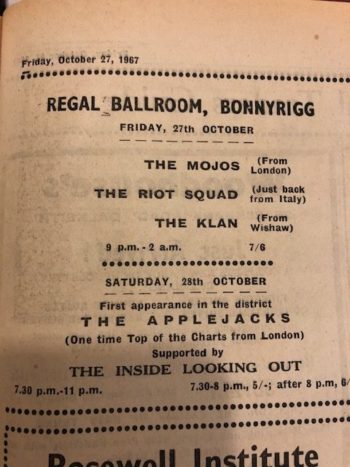 27 October 1967 – Regal Ballroom, Bonnyrigg, Scotland with The Riot Squad and The Klan

2 December 1967 – The Cavern, Liverpool with The Tee Time Shock, Fred Lloyd’s Bicycle and The Bare Essentials

24 January 1968 – The Cavern, Liverpool with The Perfumed Garden, The Beechwoods, Fred Lloyd and Gerry Shaw

Around this time Stu James relocated to the Southampton area and started performing under his real name Stuart Slater. 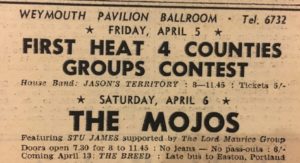 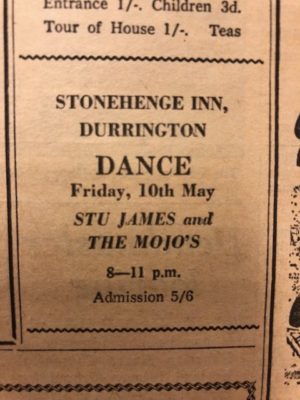 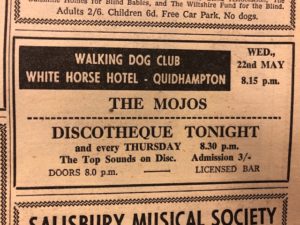 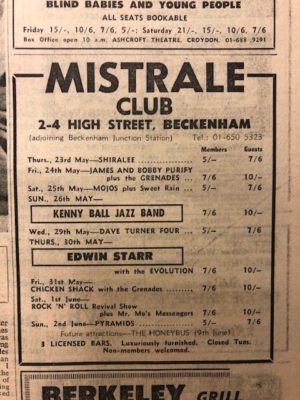 In June, the band released its new single on Liberty Records “Until My Baby Comes Home”.

Around this time drummer Tony House took over from Martin Smith on drums. 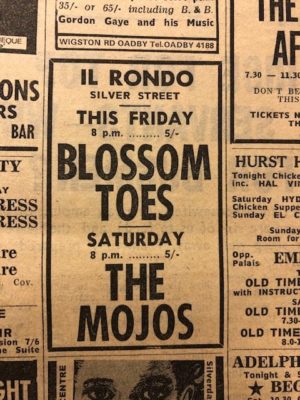 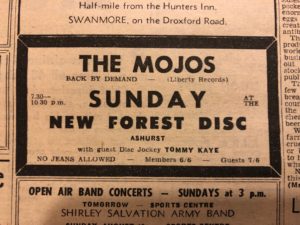 Fabulous 208 Magazine‘s 24 August 1968 issue, page 3, reported that Stu James and Nicky Crouch had gone to the Ivory Coast to play in a luxury hotel with a new group for three months (1967). It added that James now had a new version together and was working on an LP. 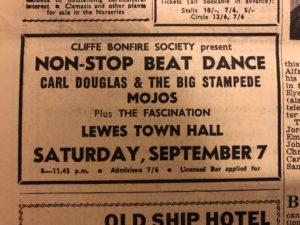 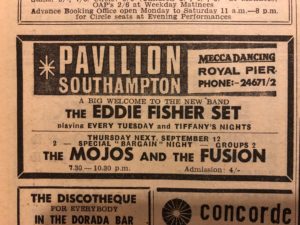 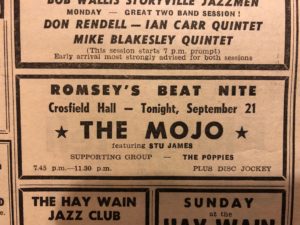 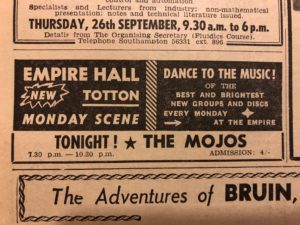 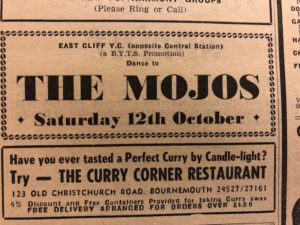 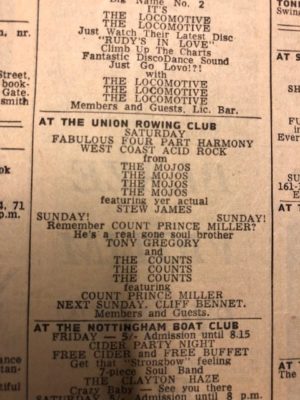 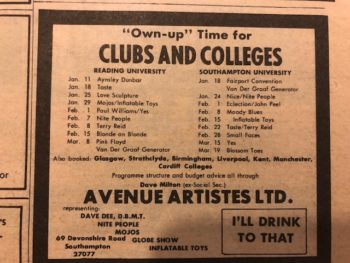 Copyright © Nick Warburton. All Rights Reserved. No part of this article may be reproduced or transmitted in any from or by any means, without prior permission from the author.