The Misunderstood: Children Of The Sun – album review 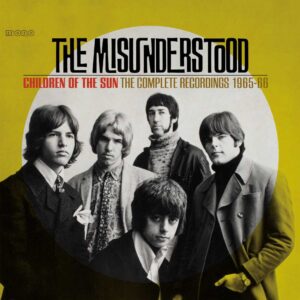 Children Of The Sun

Subtitled The Complete Recordings (1965-1966), this new set brings together all the sides cut by John Peel proteges The Misunderstood during those years, including the title track and I Can Take You To The Sun single. It comes complete with remastering and a detailed sleevenotes from Alec Palao. Ian Canty’s intentions are good, or so he would have us believe…

A long time before The Fall were ever thought of, The Misunderstood cemented themselves as “John Peel Favs”. Starting out playing in non-gigging surf outfit The Blue Notes in their home town of Riverside, the trio of drummer Rick Moe and guitar players Greg Treadway and George Phelps were only really kicked into action by the arrival of dynamic vocalist Rick Brown. Ditching The Blue Notes name, they enlisted Steve Whiting on bass and rebranded themselves in somewhat unedifying fashion as Treadway & Company. The quintet were enthused by the British music scene of the time, but they eschewed big names like The Beatles and The Stones for slightly lesser lights The Yardbirds And The Animals.

In the summer of 1965, their rather duff moniker was junked for the more hip and happening name The Misunderstoods. Like a few other US bands, they had the notion of passing themselves off as a visiting English act to create local interest. Towards the end of that year, the band recorded their first session, cutting originals like the hot garage punker She Got Me and folk-pop tune I Need Your Love. A month or so later, in early 1966, they were in the studio again, with the moody Why being a stand out along with an early version of I Unseen, which was based on an anti-war poem by Nâzım Hikmet.

Phelps left the band just afterwards and now minus the ‘s’ on the end of their name, The Misunderstood choose local pedal steel guitarist Glenn Campbell to replace him. The addition of Campbell was the magic ingredient that helped the band stand out from the crowd. Up until this point they had been a workmanlike outfit with some good tunes, but the pedal steel weirdness Glenn brought with him put them in a class of their own. It certainly impressed a certain English DJ working at the local KMEN station, who chanced upon the band playing at a shopping mall in Riverside.

A young John Ravenscroft (later, of course, John Peel) was a new disc jockey in town and found just what he had been looking for in The Misunderstood. He took on the role of de facto manager of the band, cluing them in to the strange music he was digging and arranged gigs and recording dates for them. He got the band into the famous Gold Star studio for a session, where the band mainly cut a run of blues standards. These appear on disc two of Children Of The Sun. Whilst ok, there was only a hint of what they were capable of here on Mose Alison’s I’m Not Talking, where they cut loose in a stop/start fashion.

The band made a good impression live, but Ravenscroft/Peel convinced them that they need to break out of Riverside to realise their potential. The band were confirmed anglophiles, so a move to London seemed the best option. Supervising their jaunt overseas, he enlisted the help of his brother Alan to do a similar job to the one he was doing in the USA. He also arranged so the band could stay in London at his mother’s house. A single of a couple of blues rave-ups in Who’s Been Talking and the ironically titled You Don’t Have To Go was given a limited released prior to their departure on the Blues Sound Co label. Both are authentic enough 1960s blues, but there is little hint here of the chaos and excitement the band later became known for.

The Misunderstood left the US in a hopeful mood, despite travelling by boat in the summer of 1966 to the UK without Rick Brown, who had to report for a military draft physical. It was agreed he would join the band later in London. The four landed in Southampton and made their way to the capital, which is where their troubles started. When they arrived at John’s mother domicile, she had no idea who they were and his brother Alan was absent and unobtainable. Happily, after some time sorting things out, Alan put them in touch with Nigel Thomas who offered to manage the band and found them a hovel in Wandsworth to stay in. Rick Brown flew in on 1 July 1966 and the band was complete again, though he passed the physical and was understandably wary of being called up for service in Vietnam.

The reunited Misunderstood weren’t this way for long, unfortunately, as founder Greg Treadway had enough of the British slog, with gigs hard to come by, and decided to go home. Before he left, the band recorded the very fine and wild UK version of I’m Not Talking which shows up on the first disc of this set. North East native Tony Hill was his replacement. With Hill they cut the excellent Yardbirds knock-off Children Of The Sun, a real psych-rock masterclass and the punky energy shot of My Mind, as part of a demo to reel in a record company deal. Fontana eventually bit and the band recorded their first single for the label I Can Take You To The Sun/Who Do You Love. The a-side had definite trippy pop potential and the flip was a radical reworking of Bo Diddley’s tune, so, all in all, it seemed the perfect platter for late 1966.

A carefully orchestrated publicity campaign did not bear fruit and, although The Misunderstood now had reason for optimism with the approaching summer of love, clouds were gathering. The band junked Nigel Thomas and brought Pete Sanders as manager and then Rick Brown received his draft papers. After discussing it with the band, he travelled back to the US, hoping for a deferment. It wasn’t forthcoming and he would not be returning to link up with The Misunderstood in London. Even more shattering for the band was that because UK work permits were not obtained for them, they too would have to go home, just when things seemed set for them to succeed. So after briefly recruiting Steve Colyer as Brown’s replacement, the American band members were forced to return to their homeland. Though Fontana released Children Of The Sun/I Unseen in early 1969, it was way too late and the dream was over.

Children Of The Sun brings together all their recordings in the two year period 1965 and 1966. The first disc shows a band ahead of the game, with great tunes including the title track, the moody and intense I Unseen and a riff-laden rave-up beauty in Find The Hidden Door. Though quite a few tracks are repeated from the various recording sessions, the 15 offerings contained provides a convincing case for The Misunderstood on the verge of something big before being bedevilled by bad breaks.

The second disc here is full of the band’s early work including those sessions when George Phelps was still a member of the band. She Got Me is a garage punk cracker and the jangly Like I Do has some neat 50s pop vocal moves. Even so, I have to say the preponderance of blues covers perhaps doesn’t show the band in their best light but is needed in terms of completeness. It also gives the listener an authentic feeling of what the average US club group were up to at the time

With the thousands of garage bands that sprung up all over the US in the 1960s in response to The British Invasion, you really had to do a lot to stand out from the crowd. The Misunderstood managed this with the inclusion of Glenn Campbell’s pedal steel guitar in their sound, which drove their attempts at Eastern drones right off into outer space. On the evidence provided on the first disc, they were really cursed with bad luck, because they truly had something fresh, different and exciting to offer. Bolstered by a detailed and compelling sleeve booklet written by expert Alec Palao, this set finally does the band some justice.

The post The Misunderstood: Children Of The Sun – album review appeared first on Louder Than War.