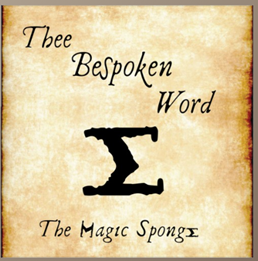 The Magic Sponge: The Bespoken Word

The fifth offering from The Magic Sponge sees the band offer up a heady blend of sublime funky post punk tunes. Heavy on tongue in cheek eccentricity and astute observations of life in the 21st Century.

Take the contributing factors. A band counting amongst its number, members of Jemma Freeman and the Cosmic Something and founding members of such luminaries as the mighty Transglobal Underground and Furniture. Who incidentally are one of the most overlooked bands of the 80’s. Apart, of course, apart from the (well deserved) focus on their hit, Brilliant Mind, quite simply one of the best songs of the era and beyond. Anyway, five albums in though, this band deserve the plaudits in their own right, this album well and truly cements that thought.

Being produced by Dave Allen, responsible for producing The Cure and Mission amongst others is the icing on the cake on this delightful collection of thirteen corking songs. The subject matter of the songs covers everything from the sublime to the ridiculous. With tongue well and truly stuck in cheek on several of the songs.

Love (almost) bookends the album. You’re the One to Blame kicking off proceedings, with the subject broached again on To Break the Code of Love. Both songs bemoaning the pitfalls of falling in love, the former, heavy on the organ, blaming the subject of the affection for “making me fall in love with you” and the latter wishing for “an enigma machine to break the code of love” alongside an addictive jangly guitar soundtrack.

The theme of that chorus links to a bewitchingly beautiful song early in the album telling the story of Alan Turing, The Turing Shroud. The lyrics throughout this album are works of art in themselves. In this song they tackle the genius of the mind of Turing suggesting of computers “they need a memory, if they ever were to think like you and me”.

On the subject of evolution, you’ve heard of Lindow Man, and Otzi the “Iceman”, meet the Bespoken Man, the latest stage in the evolution of man. One which would have Darwin turning in his grave. This hilarious tale of modern man who speaks “fluent artisan” will have you grinning ear to ear as you recognise someone you know… The humorous observations on life are continued on reggae tinged Come & Buy My Autograph. A comment on the modern phenomena of paying a fortune for signed photos of Z list celebrities.

We all love something a bit retro don’t we? So you’ll love So This is What They Call Retro. To me this has Smithsian leanings in the rhythm section and I hear elements of the eccentricity of Cud in there too. An addictively hypnotic chorus tops things off nicely.

The punny title of Counsel Houses actually reveals more astute views on life in these near dystopian days we live in. The chorus reminds us “Counsel Houses, everybody needs a lift” atop another gloriously addictively funky tune. While things take a serious note on the warning that everything is not always as it seems told in Sometimes Black is Too Bright. Seemingly understated in its elegance, the arrangements and musicianship come together wonderfully on this.

Sample the tracks below for yourself. Then take my Bespoken Word for it and buy the album. I guarantee enjoyment.

The post The Magic Sponge: The Bespoken Word – album review appeared first on Louder Than War.