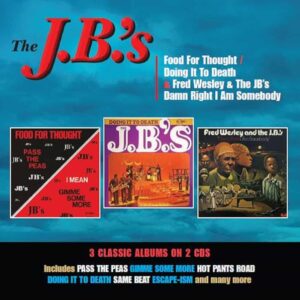 Reissue of three early 70s albums by James Brown’s backing outfit The J.B.’s Food For Thought, Doing It To Death and Damn Right I Am Somebody, the latter of which was credited to Fred Wesley & The J.B.’s. Away from their bossman, they were successful in their own right, scoring hit singles in the US pop and r&b charts….Ian Canty gets right on down…

I think it is pretty fair comment to say that the late James Brown was a hard guvnor to serve under. In the early months of 1970 The Godfather Of Soul, perhaps in a manner not unlike Mark E. Smith, replaced his long-standing backing outfit due to a bitter pay dispute, only retaining drummer John “Jabo” Starks and vocalist Bobby Byrd. The replacements drafted in were younger musicians from Cincinnati, who had previously performed under the name The Pacesetters. They included in their number William “Bootsy” Collins and his guitar playing brother Phelps. These new recruits brought with them fresh power and talent which enhanced Brown’s next recordings. These were the discs that both explored and perfected the funk sound which Brown helped usher in. For example, his classic 1970 Super Bad single.

The band were at first called The New Breed, but not too much later took on The J.B.’s tag with which they became best known. With Brown himself always hovering in the background (and quite often the foreground too) penning and playing/singing on the material, they issued a couple of smart singles that made little headway in These Are The J.B.’s and The Grunt. Both of the a sides were included on Food For Thought album. Unfortunately money issues again played a part in souring relations between the group and Brown, with Bootsy and most of the other musicians quitting within a year.

Brown soon arranged a crew of new players to perform under the same name, using some veterans of his previous bands like trombonist Fred Wesley and the sax of St. Clair Pinckney. This longer-standing combo began to tour with Brown and recorded the remainder of the material featured on this new compilation of their work from 1972-74. This J.B.’s aggregation began on vinyl with a trio of popular singles, with the middle of the three Gimme Some More almost reaching the US r&b top ten and making it as high as 67 on the mainstream pop chart.

All of these singles’ top sides are collected among the 11 tracks of the band’s debut album Food For Thought, which forms the first section of this 2CD set. This LP really pinpoints early 1970s funk, at time just before George Clinton blasted the sound off into the stars with Funkadelic. The two versions of The J.B.’s represented are on top form, with a tightness in the rhythm that ramps up the tension, but is always thoroughly accessible and danceable. Food For Thought became hugely appealing for many hip hop acts later, providing the base material for many a sample/break. For example, the squealing sax on The Grunt will be familiar to anyone who has heard Public Enemy’s Rebel Without A Pause.

From the spoken intro of Pass The Peas onwards The J.B.’s tap right into the “street” roots of funk, with Wesley’s eminently mellifluous trombone floating beautifully on the top of a taut rhythm. You can hear why Gimmie Some More was so popular, with both the chanted vocal refrain and skilfully employed horn section pleasing to my ear. On My Brother – Pt 1 their jazz/r&b roots are lucidly displayed beneath a jittering guitar jive, with Hot Pants Road and the more sedate Theme From King Heroin having a pronounced jazz funk groove too. The two part Escape-ism is a hot dance shuffle and These Are The J.B.’s ends the LP by slowly gathering tempo with a pumping bass line.

Despite Food For Thought being piecemeal in its construction, it does amount to a satisfying collection that catches funk at an evolutionary stage, frozen at a time between its r&b roots in the 1960s and disco usurping its pre-eminence later in the 1970s.

Second selection Doing It To Death follows and was really The J.B.’s first “proper” album, whereas Food For Thought was really more a compilation of single cuts by both versions of the band. The ten minute, two part title track was the band’s biggest success as a single – it was a r&b chart topper and also reached the top thirty of the Billboard Hot 100. Beginning with a suitably hyperbolic introduction, we’re straight into the feel-good groove of that single, with archetypal James Brown grunts included. More Peas is a memorable, horns-led sequel to Pass The Peas and nonsense song La Di Da La Di Day swings along very pleasantly.

Sucker again taps into r&b and jazz modes, with some lovely Hammond and brass applied and there’s two brief snippets of You Can Have Your Watergate Just Give Me Some Bucks And I’ll Be Straight, before the full version of the song concludes the album. The Richard Nixon scandal was big news at the time, so the subject matter does date the track somewhat. But it still has that irresistible funk pull and is a more than snappy enough groove. This is a teak-tough and fun album that displayed the players’ flair to the full – The J.B.’s were an awe-inspiringly solid and confident musical group at this point and Doing It To Death finds them right on the money.

Over on disc two is the final album of the set, 1974’s Damn Right I Am Somebody. For this platter Fred Wesley receives separate billing, acknowledging him as the band leader of The J.B.’s. Most of the eight tracks here are prefaced by a wild blast of sax and JB screams/shouts, a short excerpt which is funk at its most unrestrained and exciting. Which does beg the question how incendiary a whole record of that might fare, but it wasn’t to be. The LP commences with the band in turn briefly stating their personal viewpoint on the LP concept over an electric piano, before the tight strut of the title track asserts itself. Some squelchy keyboard moves are deftly juxtaposed with flowing trombone jazz funk on Blow Your Mind and doo wop acapella prefaces and dapples another street funk marvel in I’m Payin’ Taxes, What Am I Buying?.

Same Beat Pt.1 is just made to be adapted for breakbeats and Fred Wesley’s Make Me What You Want Me To Be hints at the Philadelphia sound with its lush string arrangement. Certainly a step away from their recent past which works rather well. A lengthy spoken word ramble leads into Going To Get A Thrill and You Sure Love To Ball is a peachy comedown tune in the mellow soul love tune style.

After Damn Right I Am Somebody, The J.B.’s played on with James Brown and also completed four more albums of their own during the 1970s. Arguably this set captures the band at their commercial zenith and the time when they could realistically lay claim to being the funkiest band on the planet. This collection has great sleeve notes from Charles Waring, but if I was being harsh there is plenty of room on disc two for some of the single b sides that have been missed out. This would have made for a more comprehensive overview. Otherwise this is a bonanza of pure street funk goodness, from the band that were at the head of the line in innovation.

The post The J.B.’s – Food For Thought – album review appeared first on Louder Than War.