The Haskels – Taking The City By Storm 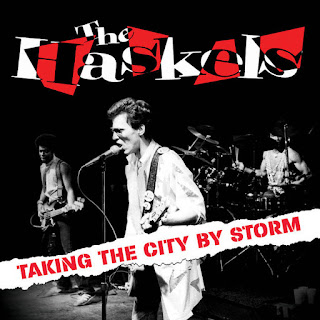 Not content to tell half a story, Splunge Comminications is back with a second volume of rare and unreleased recordings from legendary Milwaukee punk band The Haskels. 2019’s The Haskels compiled 14 unreleased tracks recorded by the original incarnation of the band in 1979. This was essentially the “lost” album by The Haskels, who broke up at the end of 1979 without having ever released any music on record. But this was far from the end of The Haskels. Post-breakup, Richard LaValliere and Guy Hoffman formed a new band called The Oil Tasters. Presley Haskel, meanwhile, rebooted The Haskels with bassist Bobby Mitchell and drummer Vodie Rhinehardt (and briefly, original guitarist Gerard LaValliere). While this newer, considerably more pop-inclined version of The Haskels proved to be short-lived, it did self-release an EP titled Taking The City By Storm in 1980. This EP, highly sought after by collectors for the past 40 years, forms the foundation of this 14-song compilation that bears its name.

In addition to the four songs from the EP, Taking The City By Storm features ten unreleased tracks culled from demos and live performances. This is the Haskels release that a lot of fans have been waiting for. The tracks from the EP, remastered for this project, hold up tremendously well and should excite fans of old school poppy punk. The title track is hands down a Midwestern punk classic. “Body Language” and “Baby, Let’s French”, songs you may recognize from the previous collection, sound stronger and more fully realized here. The previously unreleased portion of the album is no slouch either. “Stay Up All Night” and “Can I Call You?” ride the fine line between punk rock and power pop. “In Between Girls” is a more than passable stab at reggae influenced new wave. The excellent live cut “Strictly For The Uncommercial” was slated to be the title track on a follow-up EP that unfortunately never got made.

Splunge Comminications has co-released Taking The City By Storm with the venerable Bachelor Records. The album, of course, is of great interest to any Midwestern punk history buff. It completes the process of introducing the world at large to a band that’s been beloved in Milwaukee for decades. More specifically for the readers of this blog, it offers a fine example of what pop-influenced punk rock ought to sound like. And with an original copy of the EP likely to set you back hundreds of dollars, this new album is definitely the way to go! Whether you’re interested in the history or just the tunes, The Haskels are well worth looking into.